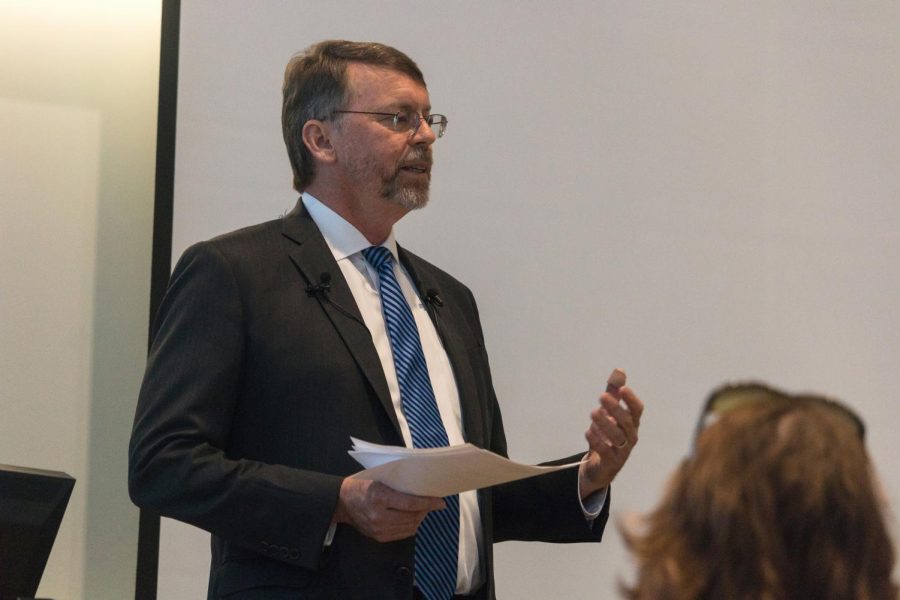 Provost Candidate W. Andrew Marcus shares his personal values and vision for WSU on Thursday morning at the PACCAR Environmental Technology building. He says compassion, inclusivity and fairness are included in his values.

As attendees filled the room, W. Andrew Marcus, a professor in the University of Oregon (UO) Department of Geography, shook hands with and talked to those who came to watch the provost finalist session Thursday morning.

Marcus emphasized the importance of his moral compass, which includes three facets: compassion; inclusivity and fairness; and transparency and honesty.

He said he expressed transparency in the past when he made it so students and staff could see certain UO financial statements.

“There has to be an explanation for why … decisions are being made,” Marcus said. “It’s not enough to say no. In fact, my preferred answer is ‘Yes, if…’ ”

One of the reasons he said he applied to be provost is because WSU is a public research university.

“Research increases the knowledge that lets us better the world, better ourselves,” Marcus said. “Education and research are mutually dependent moral imperatives.”

He said he supports the “Drive to 25” because it is so ambitious.

“For me, it’s not about a number per se. It’s about the increased social impact, the ability to reach more people,” Marcus said.

He said hiring is imperative to enhance and maintain academic excellence. As former UO dean, Marcus said he hired 35 percent of the tenure track faculty within the arts and sciences college.

Ensuring incentives and support for staff is critical, he said. At UO, he was able to secure funding for staff.

Faculty Senate Chair-Elect Greg Crouch said while Marcus was dean, he managed a campaign for his college that will reach its $140 million goal this year. Marcus was able to raise more than $35 million for the Tykeson Hall, which will house career and academic advising at UO.

After working with so many different budget models, Marcus said he has realized they should maintain consistency across campuses and allow for strategic planning.

Marcus said some WSU websites include the phrase: WSU “seeks to improve the quality of life on a local, national and global scale.”

“A lot of individuals feel that way at many universities. It’s not that often that you see that simple statement on behalf of an entire institution,” he said. “That’s the place I want to be.”

Matthew Carroll, WSU professor in the school of the environment, asked how to ensure that land-grant institutions keep good relationships between non-tenure track and tenure track faculty.

So far, Carroll said the relationship has been good, but he does not want to come back to the university in 25 years and find that relationship rotten because of their different interests.

Marcus said that is where honesty concerning job stability and contracts comes in.

For example, once a non-tenure track faculty member has been at a university for three years, they might start looking at it as their permanent job.

He said it is also important to have security for non-tenure track faculty. At UO, the longer someone has been teaching there, the longer the contract is for, which he said he thinks is a good idea.

Marcus said he likes the extension that already exists at WSU. After leaving Montana State, he said he missed the contact he got with communities and individuals. Outreach and connection are necessary, especially when transferring knowledge.