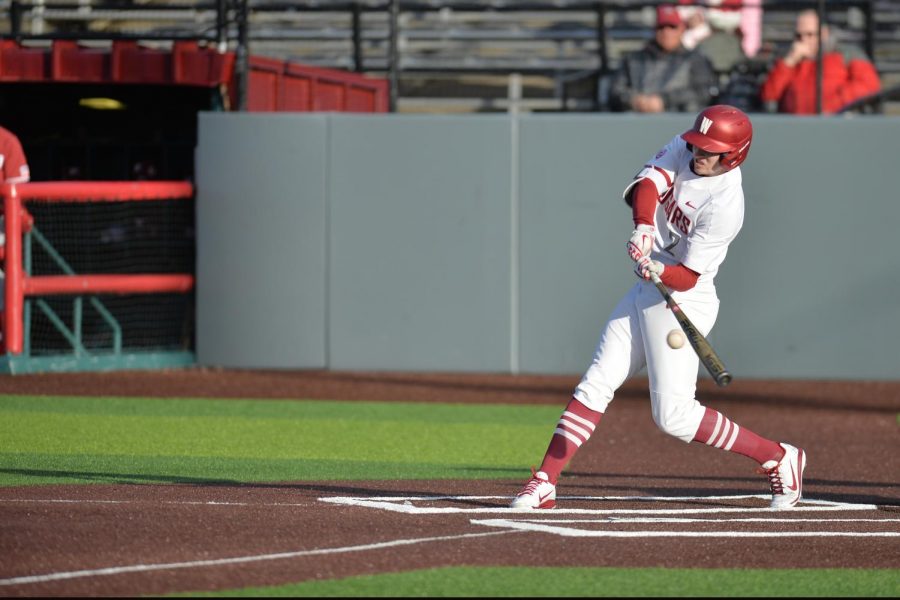 Junior outfielder Danny Sinatro makes contact with the ball in the bottom of the second inning in the game against Stanford on Mar. 29 at Bailey-Brayton Field. Sinatro's at bat resulted in a double play.

WSU baseball was crushed 18-4 in its series opener against No. 2 Oregon State on Friday night in Corvallis.

Oregon State junior infielder Andy Armstrong hit a solo home run to left-center field in the second to make it 3-0.

However, the Cougars were not ready to give up as they came into the third inning swinging their bats with confidence.

After just 2 2/3 innings, the Cougars decided to pull Bush out of the game and replace him with freshman right-handed pitcher Zane Mills.

With junior outfielder Danny Sinatro on base, sophomore infielder Jack Smith reeled him in with an RBI sacrifice flyout.

Oregon State stayed hot though as they replied with four runs in the bottom of the third inning to take a commanding 7-1 lead.

WSU did not let in as they earned two more runs in the top of the fourth, with RBI’s from freshman catcher Koby Blunt and senior shortstop Andres Alvarez.

The Beavers would earn another run in the bottom of the fourth and fifth while the Cougars brought across one in the top of the fifth to make it 9-4. WSU would not score for the remainder of the game.

In the bottom of the seventh the Beavers racked up nine runs en route to a 18-4 blowout victory.

Despite the loss, every Cougar that started recorded a hit in the game. WSU stranded 11 runners on base and recorded 12 total hits.

First pitch for the second of the three-game series against Oregon State is set for 1:35 p.m. Saturday at Goss Stadium in Corvallis.