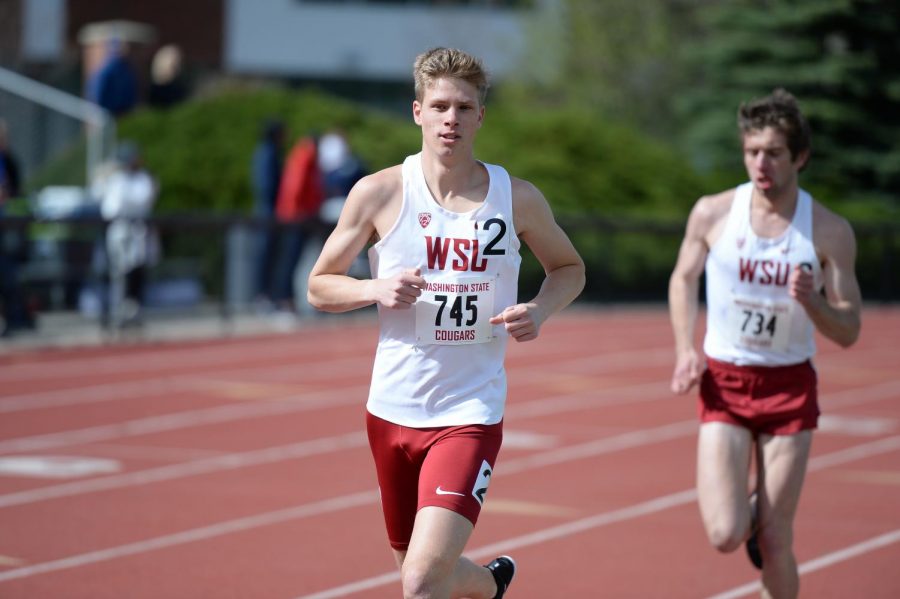 WSU track and field battled through wind, rain and hail to capture 24 event victories during the Cougar Invitational on Saturday at Mooberry Track.

Wayne Phipps, director of track and field, said the team stepped up and competed even when conditions were not ideal.

“The weather didn’t cooperate all that well, but I was really impressed,” he said. “Our team competes regardless.”

Sophomore Calahan Crawford got things started on the women’s side with a 38.42-meter toss in the javelin to claim first.

In the women’s high jump, freshman Aislinn Overby secured victory with a height of 1.66 meters.

Redshirt junior Aoife Martin captured first in the women’s hammer throw with a toss of 58.81 meters which is the third all-time best in WSU history. Senior Kaitlin Krouse won the women’s discus with a throw of 47.34 seconds.

The men’s side took 12 event victories as well, led by redshirt senior Brock Eager. In the hammer throw, Eager tossed a meet record of 70.02 meters to win the event while redshirt senior Amani Brown grabbed second with a personal record of 64.78 meters.

Eager said this meet wasn’t his best but he tried his best to post a solid mark. He said is looking to stay around the 70-meter mark in the hammer throw at the Pac-12 Championships in order to win the event.

The WSU men dominated the track events capturing victories in the 100, 200, 800 and 5,000-meters. In the men’s 110-meter hurdles, the Cougars finished first through fourth led by junior Nick Johnson who posted a time of 14.08 seconds to win the event.

Junior Kennan Schrag took the men’s 3,000-meter steeplechase with a time of 9:34.05 to take first and senior Christapherson Grant secured another win in the men’s 400-meter hurdles.

In the men’s high jump, the Cougars took first through fourth place with two athletes tying for fourth. Senior Keelan Halligan led the way with a personal record mark of 2.09 meters.

WSU will now prepare for the Pac-12 Multi-Events Championships next Saturday and Sunday at Roy P. Drachman Stadium in Tucson, Arizona.