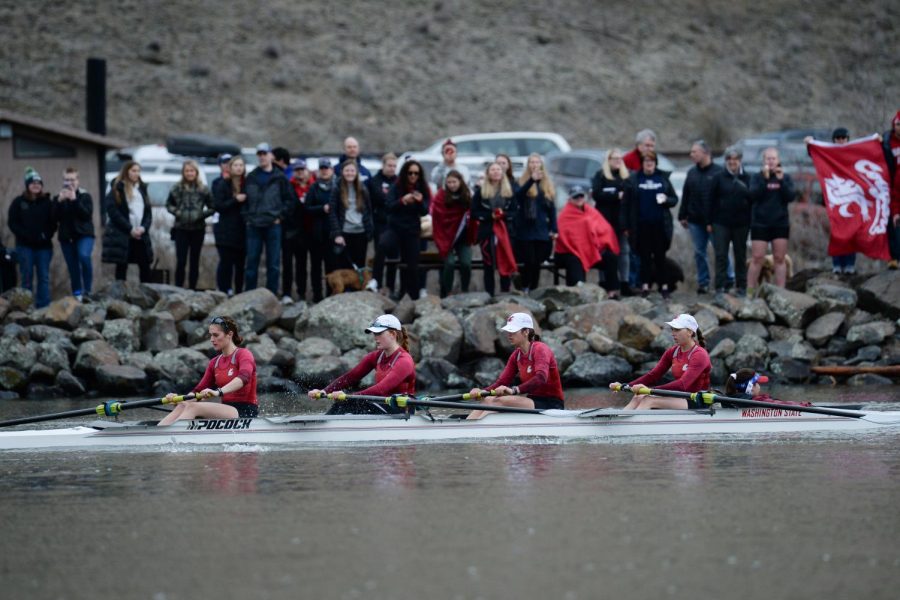 WSU’s varsity four competes in a regatta March 24 at Wawawai Landing on the Snake River.

WSU rowing won the Fawley Cup for the 25th time Sunday morning at Wawawai Landing after sweeping Gonzaga in all five races.

It’s the third year in a row the Cougars have won the cup over the Bulldogs.

Head Coach Jane LaRiviere said both WSU and Gonzaga have improved over the past month, which led to a competitive dual regatta.

“I was thankful to get the races done in great conditions,” LaRiviere said, “and it just gives us something to build off of moving forward.”

LaRiviere said everyone showed up focused and ready to go, which resulted in victories across the board.

The varsity eight continued WSU’s success as they beat Gonzaga by just under three seconds in the second race.

Senior Paige Danielson, who was the bow on the varsity eight, said the team fought choppy water and a rough start in their victory and the Cougars needed to focus on their boat, not their competitors.

“We’re racing against each other, but you can’t slow anyone down in rowing,” Danielson said. “There’s no defense in rowing.”

The varsity four had a new line up, and junior Linnea Davison, who was the bow on the varsity four, said she thinks everyone was excited to race.

“When it started it just felt really good, so I think we just went for it,” Davison said.

The Cougars have only competed three times during the spring season after the Clemson Invite in South Carolina was canceled last weekend due to poor racing conditions.

“We haven’t had a lot of opportunities to race so any opportunity to race is really good for us,” Davison said.

WSU will now get ready for the Pac-12 Championships at 9 a.m. May 19 in Gold River, California.