Tennis selected to NCAA Tournament for first time since 2012

Cougars will face Miami in first round match Friday 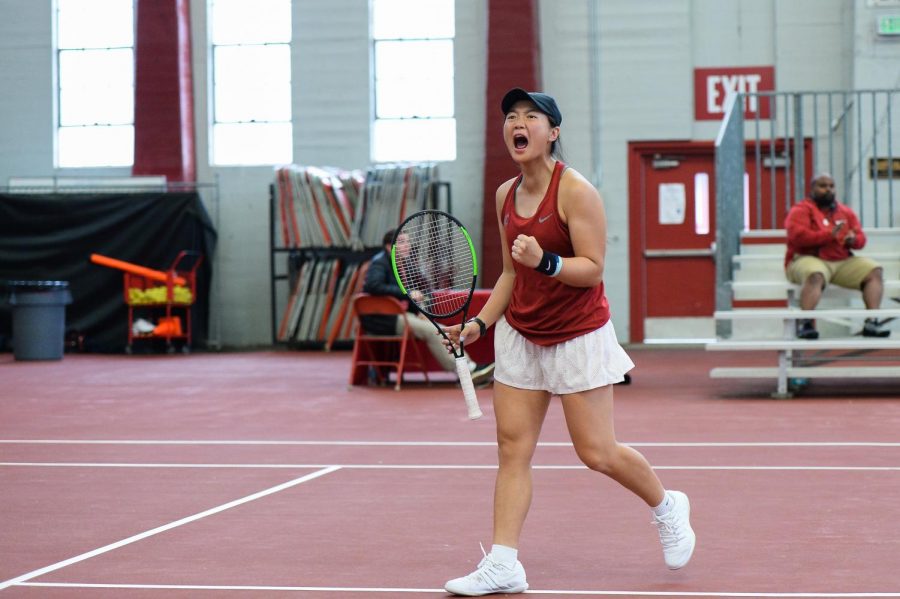 Freshman Yang Lee celebrates after winning a set during her match against USC on April 14 in Hollingbery Fieldhouse.

No. 34 WSU tennis was selected to the NCAA Tournament on Monday and will face No. 19 Miami in the first round Friday in Stillwater, Oklahoma.

The Cougars (19-10) were one of 64 teams selected to the tournament. The winner of WSU’s match with the Hurricanes (18-7) will face the winner of the match between No. 15 overall seed Oklahoma State (19-7) and Central Arkansas (20-7) in the second round Saturday.

When the team received the news, they celebrated and took to social media to show off the vanilla and chocolate cake they enjoyed during their viewing party.

This is the first time since 2012 that WSU has been selected to the NCAA Tournament and third time under Head Coach Lisa Hart.

“It’s been awhile,” Hart said. “We barely missed it last year, we were the first team out. I think our returning players have done such a great job in continuing to work really hard and use that as motivation.”

Miami was most recently swept 4-0 by No. 2 North Carolina in the ACC Championship semifinals.

The Cougars are coming off being swept 4-0 by No. 4 Stanford in the second round of the Pac-12 Championship.

Seniors Aneta Miksovska and Tiffany Mylonas said they were both excited to be playing in the NCAA Tournament in their final season.

“I think it’s amazing, it was worth the wait,” Miksovska said. “We waited for the last bracket and it was stressful but we got the great draw, I’m super excited.”

Mylonas, who was smiling ear to ear listening to Aneta’s comments, said the Cougars are looking to do some damage in the tournament.

“We’re ready to win the first two rounds and then go to the Sweet 16,” she said.

The time for the Cougars match against the Hurricanes on Friday has yet to be determined.