The Daily Evergreen • May 1, 2019 • https://dailyevergreen.com/56472/news/community-honors-outgoing-provost/ 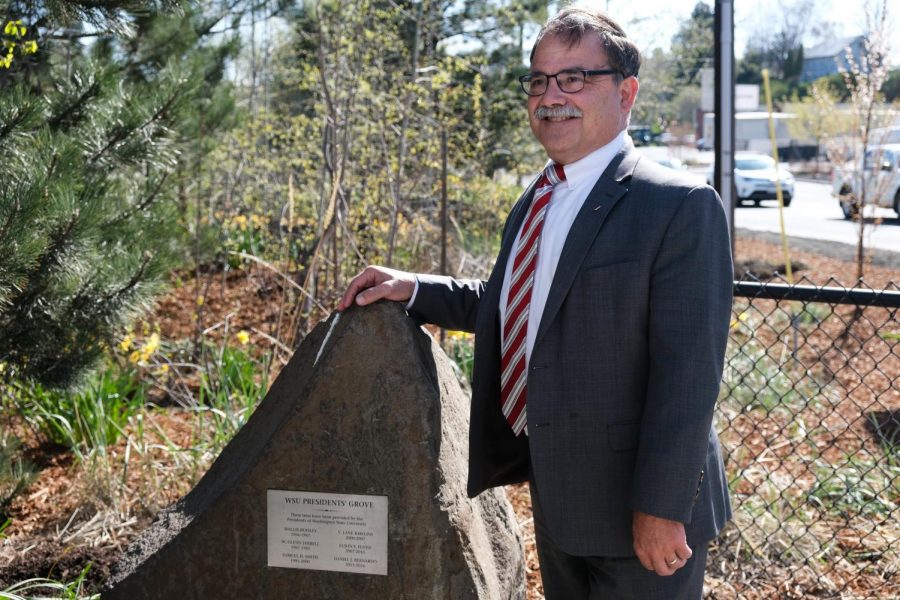 Outgoing Provost Daniel Bernardo poses by a plaque honoring him and past presidents of WSU on Tuesday at the Greenway Trailhead.

Dozens of people gathered at the corner of Northwest Ritchie Street and Grand Avenue on Tuesday to honor the career of outgoing Provost Dan Bernardo.

Bernardo’s name was added on a plaque located at the President’s Grove on Grand Avenue.

“It is truly an honor to be recognized with the likes of Glenn Terrell, Lane Rawlins and Elson Floyd,” Bernardo said in a speech.

WSU President Kirk Schulz said Bernardo was not afraid to tackle difficult challenges and described him as pragmatic. He said Bernardo is going to work as a special advisor to him in Bernardo’s retirement, and he is looking forward to continuing to work with Bernardo.

Jansen VanderMeulen, former WSU student regent, also spoke at the ceremony. He talked about his time working closely with Bernardo when Bernardo served as interim president.

“Dan’s attitude toward students has been of open arms,” VanderMeulen said.

He told a story that he said summed up Bernardo’s connection to the student body during his time at WSU.

He said there was a time when a handful of graduating students got caught on the Kimbrough roof and faced trespassing charges. When Bernardo found out about the incident, he said he was going to “pardon the turkeys.”

VanderMeulen said when Bernardo took over as interim president, there was a lot going on at the university. Bernardo handled one of the most difficult times at WSU, he said.

“We had to find out who would lead the ship,” he said, “and that answer was Dan Bernardo.”

Bernardo said he takes pride in being a WSU alumnus and has carried that over into his career.

“I’ve always strived for students to have the same kind of experience that I had,” he said.

Bernardo thanked his wife, Pam, for her unwavering support during his tenure. He said in the throes of the job, it is important to have good support.

“There’s got to be someone to take care of you and everything else,” he said.

Bernardo thanked the people that he worked with, and he said being president is not a one-man show.

“You have to have a great provost,” he said to a chorus of laughter and applause.