The Daily Evergreen • May 3, 2019 • https://dailyevergreen.com/56490/sports/track-travels-to-arizona-for-pac-12-multi-events-championship/ 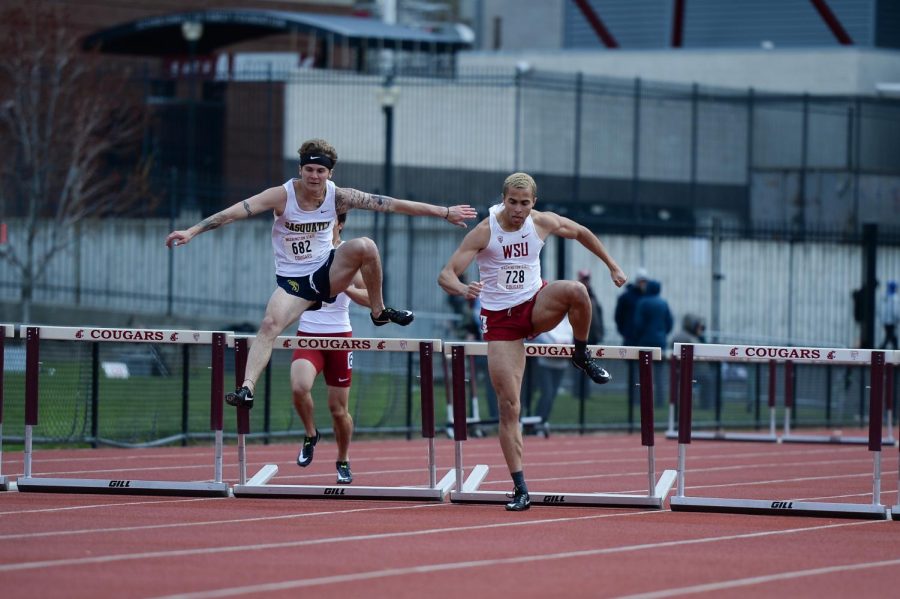 Sophomore Austin Albertin from Spokane Community College, left, and senior Christapherson Grant compete in the men 400-meter hurdles during the Cougar Invitational on April 27 at Mooberry Track. Grant finished first in the event with a time of 53.96.

WSU will compete in the Pac-12 Multi-Events Championships beginning this Saturday in Tucson, Arizona. The event will run both Saturday and Sunday.

The first day of multi-events will begin at 5 p.m. with hurdles and will likely run well into the evening. Sunday will begin at 4 p.m. with different events than the day before.

During the day, there will be the traditional track meet occurring beginning at 11 a.m. both days.

Although this will be happening around them, the Cougars are only competing in the multi-events and saving the rest of the team for the real Pac-12 Championships the following weekend.

Track and Field Director Wayne Phipps is excited to see what the athletes can do in these multi-event competitions.

“We have two athletes going, one on each side,” Phipps said. “Lindsey Schauble on the women’s side who is very experienced, been to every Pac-12 Championship … and Ray Littles has been in other multi-events and really grown as a multi-event competitor.”

For senior Lindsey Schauble, this may be her last rodeo as she only has this meet left to compete in a heptathlon and the Pac-12 Championships.

Senior Ray Littles is in the same boat, but this will be his first year competing in the Pac-12 Multi-Event Championships.

Littles has competed in a wide variety of events when asked to, so for him to enter into the decathlon was basically the next step.

“I’m excited to see him in his first Pac-12 Multi-Event Championship,” Phipps said. “He’s been so well-rounded that we’ve used him wherever we’ve kind of needed him, so now it’s culminated into him becoming a multi-eventer.”

Phipps also said he has been able to score for the Cougars in multiple events whenever he was asked to step in during NCAA’s first round of relays and other different throwing and running events.

“He sort of took one for the team and when we needed him to,” Phipps said. “He placed a little more of a focus on those other events.”

As always, the Cougars look to take home as many wins as they can whenever they compete, but most of their focus is going towards the overall Pac-12 Championships a week from Saturday.

For now, most of the team isn’t travelling to the multi-events, but the entire team will be traveling and competing in the Pac-12 Championships on the 11th.