The Daily Evergreen • May 3, 2019 • https://dailyevergreen.com/56493/sports/cougar-tennis-seniors-looks-back-on-time-in-pullman/

Cougar tennis seniors looks back on time in Pullman 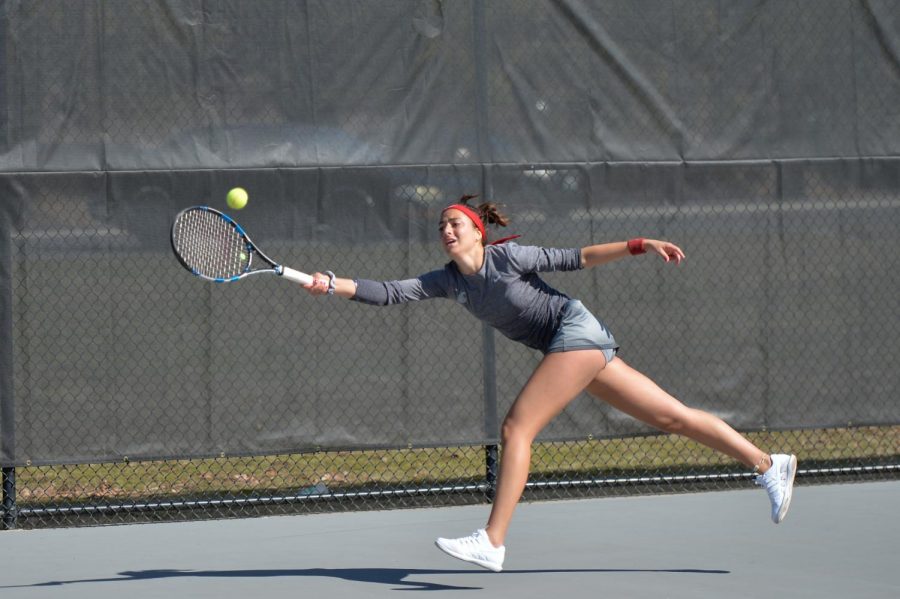 Senior Tiffany Mylonas hits the tennis ball back towards her opponent on Mar. 31 at the Outdoor Tennis Courts. The game against Arizona resulted in a 6-1 win for the Cougars.

As WSU tennis wraps up after the NCAA’s are over, Cougar seniors Aneta Miksovska (2015-19) and Tiffany Mylonas (2017-19) will hang up their rackets.

Every season, one of the hardest things for the players and coaches to do is to say goodbye to their seniors. Thanking them for their time as players, inspirations, and friends are some of the most valued farewell notions to make.

Head Coach Lisa Hart said both girls have leading qualities, and they’ve really brought this team up in wins and spirit.

“I think our seniors have incredible leadership, both on the court and off the court. Definitely the way in which they represent our program, the things that nobody sees,” Hart said. “I think they’ve kind of just pulled everyone else along, and I just can’t say enough good things about them.”

Despite it being their last season, the two seniors should be proud of the success this year.

The Cougars beat UCLA for the second time since 2001, making their ranking the new team highest at No. 15. WSU also got seeded into the NCAA bracket for the first time since 2012.

Miksovska is majoring in sport science, holding a 3.80 GPA. She said this is the best team she’s played with so far since becoming a Cougar.

“I’ve seen four different teams, and this is the best team so far, and I’m really thankful that this is the last year,” Miksovska said. “We’ve been through a lot. We started from the bottom, and now we made it. I’m so happy.”

In her four years as a Coug, she hasn’t wasted the opportunity to put her name in the team’s history book. She earned her 90th career single win earlier this year against Brigham Young University, tying her for fifth in WSU’s all-time singles win record next to Ekaterina Burduli (2004-08).

Since then, Miksovska has gotten seven more wins, putting her total at 97 after the first round Pac-12 championship win against Colorado.

Mylonas, though she has not been at WSU all four years, has left her mark and inspired her team through her winning enthusiasm.

“I’m really competitive if there’s a challenge. It can be tennis or anything. I’m competitive. I want to win,” Mylonas said. “I don’t give up. I always bring my team up, and I’m always smiling to everyone on my team to bring them up.”

Transferring from the University of Louisiana Monroe, she’s become a dedicated Cougar majoring in strategic communication. Her skill in singles and doubles have led her on to be a team captain, and her competitive nature makes her a treat to watch.

After hearing of the news of her team’s acceptance into the NCAA Championships, she reiterated that the first round wouldn’t be her team’s stopping point.

Being a part of two great back-to-back tennis seasons, she has felt like she’s made a great addition to her team.

“This team has been so good to me, we’ve all worked together,” Mylonas said. “Last year, we were one seed away from going to the NCAA’s, so this year we wanted it more than anything.”

After the team NCAA matches, Mylonas will be paired to play doubles with freshman Hikaru Sato in the NCAA Individual Championships. This is the first time a WSU doubles team has gone to this championship since 2002.

The singles and doubles tournaments start after the NCAA team championships and will be held from May 20 to May 25 in Orlando, Florida.

Since coming to Pullman, Mylonas has been focused immensely on her team.

“Plans after graduation, I don’t know yet,” Mylonas said. “I’m just focusing on tennis first, the NCAA’s, then the sweet 16 and then whatever comes next.”

It’s been a great time to be a Cougar, and the team will miss Mylonas’ and Miksovska’s personalities and athleticism.

Their last team appearances will be at the NCAA championship where they face University of Miami noon Friday.