Cougar athlete has been golfing since she was young, her father says she has always been gifted on the course 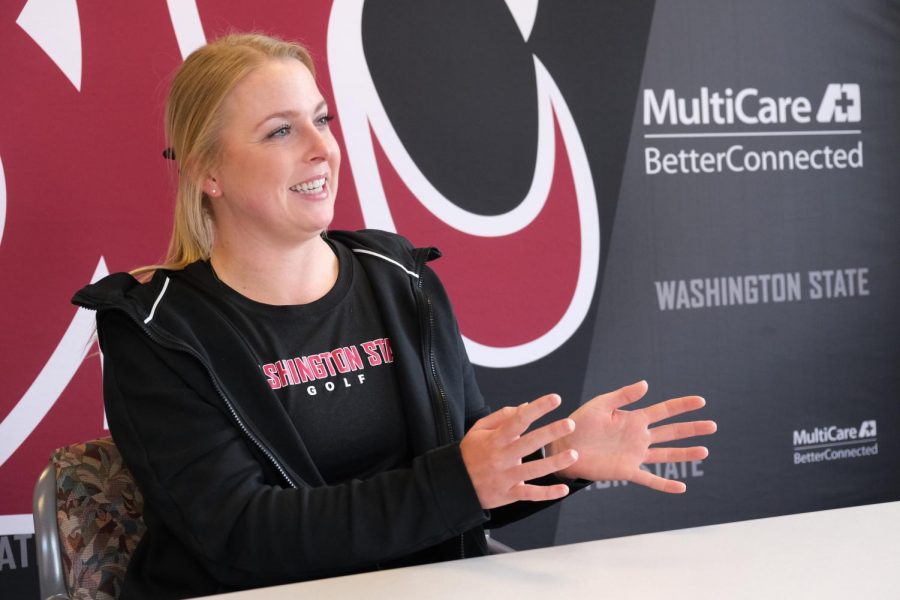 Senior Madison Odiorne reflects on the support system provided by WSU Athletics during her time at WSU Monday afternoon in Bohler Gym. “Everything kind of just pushed her back to being a golfer,” Odiorne’s father says.

When she was about 3 years old, senior Madison Odiorne swung her first golf club, and a few years later she started competing in golf.

Madison comes from a family of golfers. Her grandfather played golf at Northwest Nazarene University and her grandmother, mom, dad, aunt and uncle all play golf too.

As a girl, Madison would often accompany her dad, Dan, to the driving range about twice a week. Her grandparents were one of the founding members of Broken Top Club, in her hometown of Bend, Oregon.

From an early age, Dan saw that his daughter had a talent in golf.

“She just had the ability to concentrate as a young girl and focus,” Dan said.

In addition to golf, she participated in gymnastics, soccer, cross country and track growing up. Eventually, the other sports came to an end.

After coming back from a tournament, Madison’s middle school track coach asked her what her golf handicap was. When she responded with a five, he told her that she needed to play golf and did not need her running track, Dan said.

That memory always stuck with him, he said.

“She tried to do more than just be a golfer … everything kind of just pushed her back to being a golfer,” Dan said.

In high school, Madison’s handicap was about +2.5, Dan said. She earned four varsity letters and was the team captain her sophomore, junior and senior years.

She was the first Oregon high school golfer to win four consecutive class 5A titles. She was also a two-time Junior America’s Cup team member.

Before Madison made a decision to come to WSU, her parents did research on Kamimura. They talked to other parents and other coaches so they knew their daughter would develop under the coaching staff.

Dan said Kamimura is the reason why his daughter played golf all four years of college, which was important to him as a parent.

“You’re entrusting your child with a university or with a coach,” Dan said.

Kamimura and White watched Madison compete in the U.S. Girls’ Junior Championship before signing with WSU. Madison said she got paired with a No. 3 girl from Mexico and lost after the two tied and went into overtime.

Madison said you can’t compare yourself because you never know what’s going to happen in golf.

“At the end of the day, it comes down to just what can you do and doesn’t depend on what other people do,” Madison said.

She loves learning and the human body, Madison said. She studied kinesiology and completed the prerequisites for medical school.

After WSU, Madison wants to go to physician assistant school and would like to attend Oregon Health and Science University.

Madison said she has looked at other schools across the country, including the University of Washington.

Although UW is not her first choice, she still liked the program. She will remain a Coug at heart reguardless of where she goes, she said.

“I’ll still be a Cougar,” Madison said. “Yeah, I’ll be wearing my backpack there.”

Madison said she will continue to play golf, but it will be different because she will have to make time for golf.

Madison enjoyed the relationships she has made because of golf. Unlike other sports, golf allows players to interact with their competitors as they walk through the course, she said.

“I have made my best friends for life, I’m pretty sure we’ll be friends for life, through this,” Madison said. “I’m very grateful to have had the experience of where you can play competitively but also get to know people.”