The Daily Evergreen • May 3, 2019 • https://dailyevergreen.com/56503/special-editions/student-leader-wins-academic-championships/ 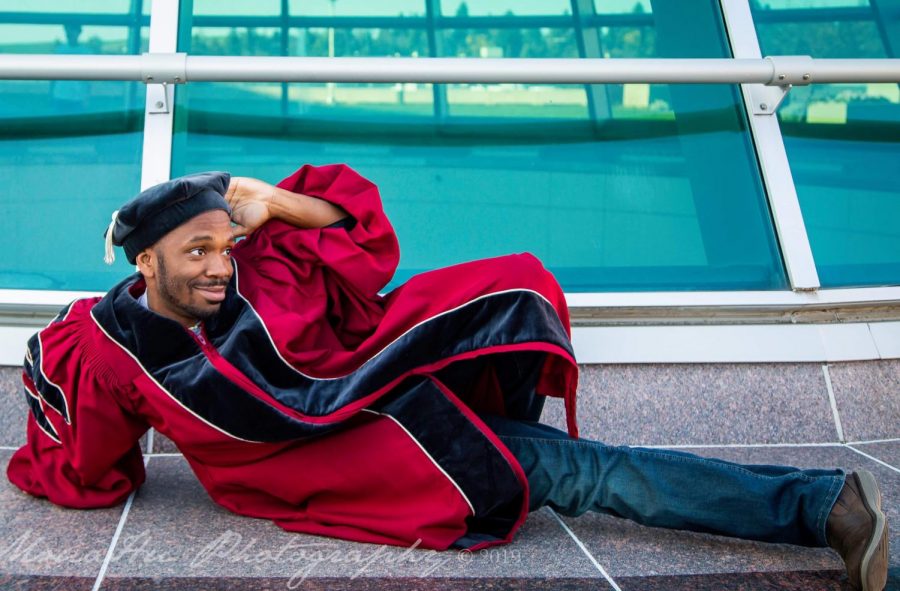 He’s an inspiration, and I don’t usually say that about people younger than me,” GPSA Vice President Josh Munroe said. “Amir has been invaluable to us.”

Four years ago, Amir Gilmore took a gamble to move to Pullman from his long-time home in New Rochelle, New York, to get his doctorate in cultural studies.

Gilmore said he did not expect to make it to this point in his life due to a troubled childhood. Yet he was able to get a bachelor’s, Master’s and doctorate degree with the support of his mom, eighth-grade teacher and peers.

“It’s a miracle to go through all the stuff that I’ve been through in life [and] be at this point,” he said.

Gilmore said after he graduates he wants to continue to do pre-service education wherever a community needs him.

However, first he wants to catch a breath.

“I told my mom: no more degrees … [finally graduating] is like my NBA championship,” Gilmore said.

The first year Gilmore was at WSU, he realized he wanted to have a student leadership position and joined GPSA. Gilmore began his membership in the organization as a special elections senator, and eventually became the group’s president for his last year at WSU.

Gilmore said he valued being able to help students who were struggling and seeing his work positively impact WSU.

His proudest moments include when he was able to make sure the university did not cut graduate stipends, as well as when he played a part in preserving The Daily Evergreen during budget cuts.

One of Gilmore’s worst moments at WSU highlighted the most important aspect of the Coug community, he said. Gilmore was driving to Pullman through Idaho when he struck a moose that wrecked his car, nearly killed him and left him without money.

He said this accident was a low point in his life, but other graduate students were quick to support him afterward.

“It’s a cool community [where] people really come together,” Gilmore said. “We show that the people here at the university care about students.”

Gilmore wanted to shape GPSA into rebuilding networks within the community and collaborating with different organizations in a humanistic way, he said. The organization became a family for its members, and Gilmore said he hopes this connection lasts in the future.

Carolina Silva, GPSA director of university affairs, said Gilmore’s power of bringing people together was rooted in his want to empower underrepresented groups on campus.

“Amir would say, ‘Here’s the mic – now you have a voice,’ ” Silva said. “[He would] make sure that those who are the most impacted are listened to [and] that their issues are being brought to the table.”

She said he wanted to serve as an advocate for groups like students at WSU research extension sites, who were paying Pullman campus fees and not receiving the same benefits.

Gilmore didn’t want the future of WSU to be reserved to only its Pullman campus, but he wanted to be inclusive to the other WSU campuses, Silva said.

“He is a part of the fundamental fabric of university life,” she said.

Josh Munroe, GPSA vice president of legislative affairs, said Gilmore helped members in GPSA learn how to be better student advocates. He said Gilmore has a natural ability to understand and connect with people, which translated in his work for the student body.

“He’s an inspiration, and I don’t usually say that about people younger than me,” Munroe said. “Amir has been invaluable to us.”