Senior made my home at the Evergreen 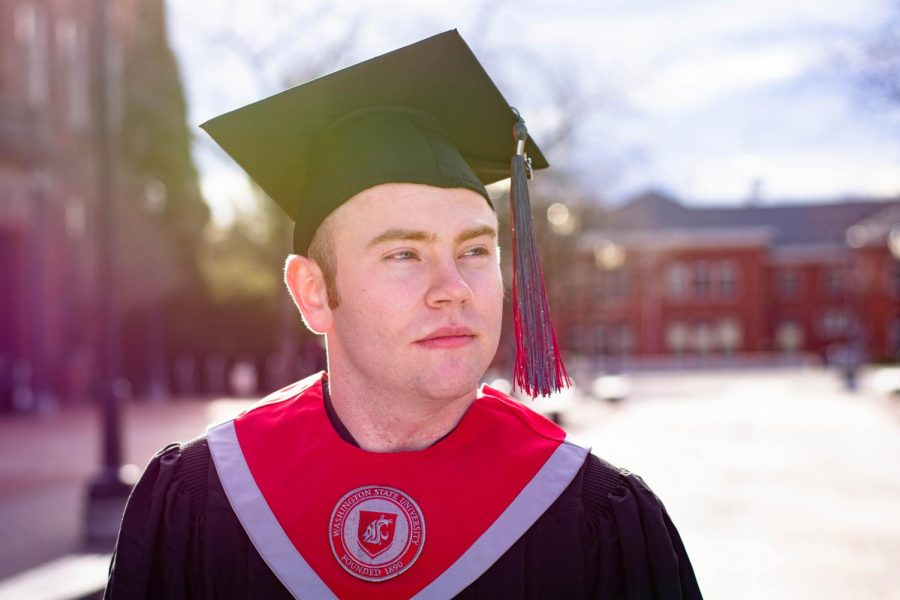 Dylan Greene has worked at The Daily Evergreen for two years, filling the roles of a reporter, an editor and an editor-in-chief over that time. He details not only how he found family and friends here, but a home.

It took me a while to write this. Even as a journalist, words can be hard to come by when something means so much to you.

That’s why when I started to write this, I didn’t want to. But at some point, I realized I had to say goodbye.

Goodbye to the lifetime friends I made inside and outside the Evergreen. Goodbye to the instructors who taught me lessons I will take with me wherever I go in life. And goodbye to a place that helped me figure out what I want to do after college.

I spent my first year of college trapped in my Stimson Hall dorm room unsure of what I was getting out of my college degree. I was worried about getting straight A’s and ignored any opportunity to gain career experience.

This was mostly because I was shy and would rather live in a shell then step outside and expose myself to anything new or uncomfortable.

Then in the fall of 2017, I found the Evergreen. I stumbled across the Evergreen while interning at my local newspaper, the Stanwood Camano News, that summer. I was searching for a job in Pullman when I came across a reporter application for the Evergreen.

I contemplated applying online but decided I would fill one out in person when I returned to Pullman in August instead. Once I moved into my new apartment that August and settled in, me and one of my roommates made the 30-minute trek from our place to Murrow Hall 122.

I was immediately greeted by Rebecca White and Jacob Moore, the news editor and sports editor at the time, respectively. I was decked out in a tank top and some raggedy shorts — the perfect outfit for a first impression.

Luckily, they were able to look past my elegant outfit and hand me an application. I took that sucker home and scrambled to put together the most professional-looking resume and cover letter ever. I even included a letter of recommendation from my editor at my local newspaper.

Little did I know, none of that was necessary as I was hired without hesitation, mainly because they needed writers.

Due to my experience, I was immediately thrown on the football beat. I loved every second once I got over my fear of interviewing athletes twice my height like former offensive lineman Cody O’Connell.

Not only was I going to be leading a section, but I was also going to do it by myself with no assistant. That meant working four nights a week and being responsible for pretty much everything in the section.

For someone who has always struggled with self-confidence issues and focused too much on schoolwork, it was hard to imagine taking the position. But the confidence the other editors showed in me helped me take the leap and give it a shot.

So, I did and just when I thought I had reached my pinnacle at the Evergreen, Madison Jackson, the editor-in-chief at the time, approached me halfway through the spring semester and told me I should take her position in the summer and fall.

I thought she was joking, but she was serious. Once I realized that, I spent my entire spring break thinking about it. I knew how demanding the position would be, but after watching Madison battle through the threat of having daily print production cut, I felt inspired to carry on the tradition of the Evergreen.

By the time I knew it, it was May 4, 2018, and I was officially the editor-in-chief. I spent that summer learning everything I could and grinding each week to put out a paper with a limited staff.

I also met my best friend, Ian Smay, who served as the news editor during the summer. We started on a four-month investigative piece that summer, and I will always be grateful for what he taught me about being a great journalist.

After surviving the summer, it was time for the real thing. Five nights a week and staying in the newsroom until 11 p.m. every night was now a reality.

I was overwhelmed before the start of the fall semester and throughout the process, but I surrounded myself with amazing people who supported me along the way when I felt like giving up at times. That group of editors will forever hold a special place in my heart.

Now I leave the Evergreen as the deputy sports editor.

There are so many people that helped me throughout my time at WSU and Evergreen that I’d like to thank.

First, I’d like to thank the amazing professors in the Edward R. Murrow College of Communication who taught me everything I know about journalism. Without them, I wouldn’t be able to pursue my dreams.

I’d also like to thank every person that has worked at the Evergreen during my time here because they all had an impact on the journalist I’ve become. I’d especially like to thank our Office Manager Tracy Milano, who has been like a second mom to me and always puts a smile on my face whenever I see her.

But most of all, I want to thank my parents, who mean the world to me and have put up with my sh-t for the last 20 years. I don’t know what I would do without them.

No matter where I go in life, the Evergreen and WSU will always be my home.