The Daily Evergreen • May 3, 2019 • https://dailyevergreen.com/56611/news/researcher-analyzes-data-from-college-aged-males-on-sexual-violence/ 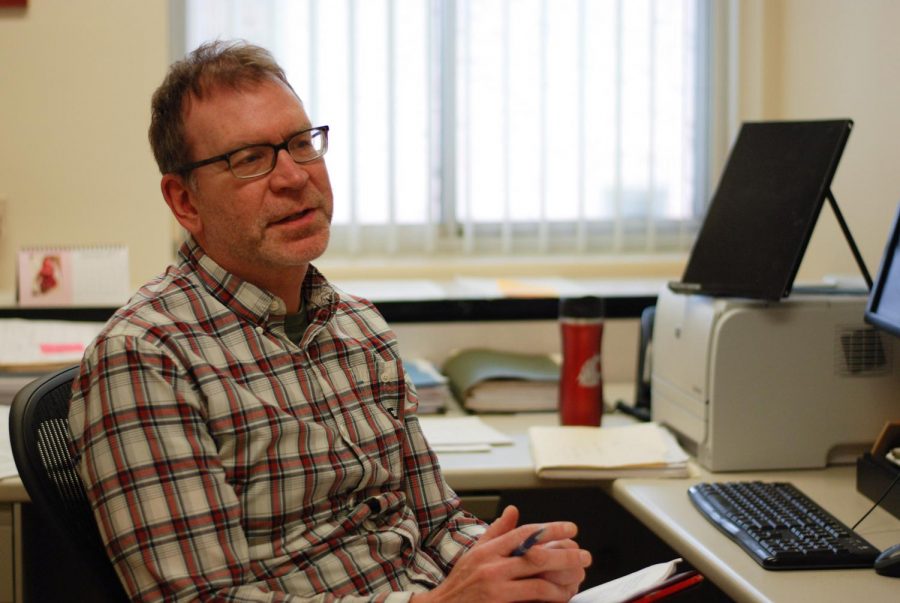 Michael Cleveland, Associate professor in the Department of Human Development, explains his research to determine if sexual aggression in college-age males is a result of attending bars and parties on Wednesday afternoon in Johnson Tower.

An associate professor at WSU helped analyze research on the sexual aggression of college-aged males.

Michael Cleveland, department of human development associate professor, said the research implemented the use of longitudinal data, or data collected over a period of time, to examine how alcohol use contributes to sexually aggressive behavior.

He said surveys were conducted on 1,043 males who attend a northeastern university, including the entire male population of a 2012 freshman class.

“A lot of research has been done in the past — conducted to show some link to alcohol use,” Cleveland said, “but very little of that research used longitudinal methods.”

He said longitudinal methods allowed the researchers to follow the same people over time. This differs from cross-sectional research, which only surveys a variety of participants once.

“We were able to uncover links across time and make some stronger conclusions about the links between alcohol use and sexual aggression,” Cleveland said.

He said the methods used helped the researchers analyze personality differences of the participants, like their social status.

Cleveland said the males were recruited through emails by Maria Testa, a senior research scientist at the University of Buffalo.

The recruits were encouraged to complete surveys every semester from 2012-14, but only surveys from fall semesters were used, he said.

He said survey questions included how often participants attended parties within a semester, their attitudes toward casual sex and how often they engaged in casual sex.

Other questions included strategies participants have used to convince women to have sexual intercourse with them, which ranged from the participant taking off their clothes to threatening violence against the woman, Cleveland said.

The confidentiality agreements allowed the participants to anonymously self-report illegal behavior, including underage drinking and sexual aggressiveness without fear of being reported. Cleveland said this encouraged the participants to truthfully answer survey questions for the research.

“Facing sexual aggression is a very common experience for college women,” he said. “It’s a very important subject, and a public health issue that deserves research.”

Cleveland said he began to work on analyzing the data after it had all been collected.

He said of the thousand plus participants, 790 of them dropped out of the research before the completion of wave three, which was around the participant’s third year of college.

“We were able to use responses from all 1,000 men,” Cleveland said.

He said some participants were more likely to report less violent sexual aggression than more extreme behaviors. This was controlled by a sexual strategy scale, which standardized the measure of sexual aggressive behavior. He said the scale included 22 items describing tactics used to obtain sex from another person.

Cleveland said participants were less likely to report acts of violence, even when the survey was anonymous.

“Our results are conservative,” he said.

Cleveland said the research has practical applications to prevent and intervene possible sexual aggression by providing analysis that relates to the behavior.

“[The programs] target all three of those aspects found in analyses,” he said. “Teaching and talking to college men about sexual aggression, teaching men about open communication and about sexual behaviors.”

Cleveland said the analyses obtained from the research can also be used to create bystander intervention programs where college students can be taught how to first recognize situations that may be problematic, especially when in a situation involving alcohol consumption.

“These analyses were controlling for three factors: men’s hostile attitudes towards women, personality differences and delinquent behaviors,” Cleveland said, “that are associated with sexual assault and aggression, self-control, impulse control.”