The Daily Evergreen • May 9, 2019 • https://dailyevergreen.com/56773/sports/cougs-compete-at-conference-championships/

WSU looks to carry success into Pac-12s, hopes many athletes will qualify for the NCAA West Preliminaries 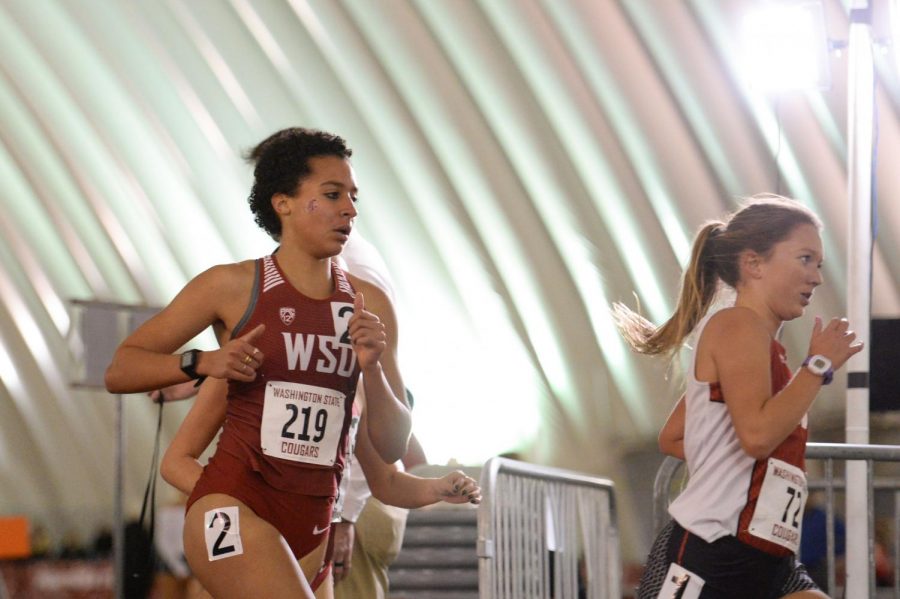 Sophomore Samantha King-Shaw rounds the corner in the 3,000-meter race at the WSU Indoor Meet in the Indoor Practice Facility on January 19th. King-Shaw placed first in the event with a time of 10:28.32. The Cougars took the top three finishes in the event.

WSU track and field teams will head to Tucson, Arizona to compete in the Pac-12 Championships on Saturday and Sunday at Roy P. Drachman Stadium.

The Cougars will send 28 men and 28 women to the Pac-12 Championships, which is the limit per school.

After a strong performance at the Pac-12 Multi-Event Championships, Director of Track and Field Wayne Phipps said they are excited to carry the momentum into this weekend.

Men’s hammer throw will begin the field events at 11 a.m. Saturday. WSU redshirt seniors Brock Eager and Amani Brown will attempt to get early points for the Cougars in the men’s hammer throw. Phipps said they are both throwing well.

Field events will continue throughout the day, and at 8 p.m. will finish with women’s shot put and women’s long jump. Both days the field events will run the trials followed by the finals except for pole vault and high jump.

At 11 a.m. Sunday, the women’s hammer will be the first field event of the day. Field events will wrap up with the women’s discus at 7:15 p.m.

An awards presentation will follow at 9:50 p.m. The event can be viewed on the Pac-12 Networks.

Phipps said they are trying to send as many athletes as possible to the NCAA West Preliminaries.

After this weekend, a final descending order list will be presented and coaches will enter and declare who they want to be considered for each event based on the list. After that, the top 48 athletes, with an exception for relays, declared in each event will go on to compete in the NCAA West Preliminaries, Phipps said. They will know around the middle of next week.