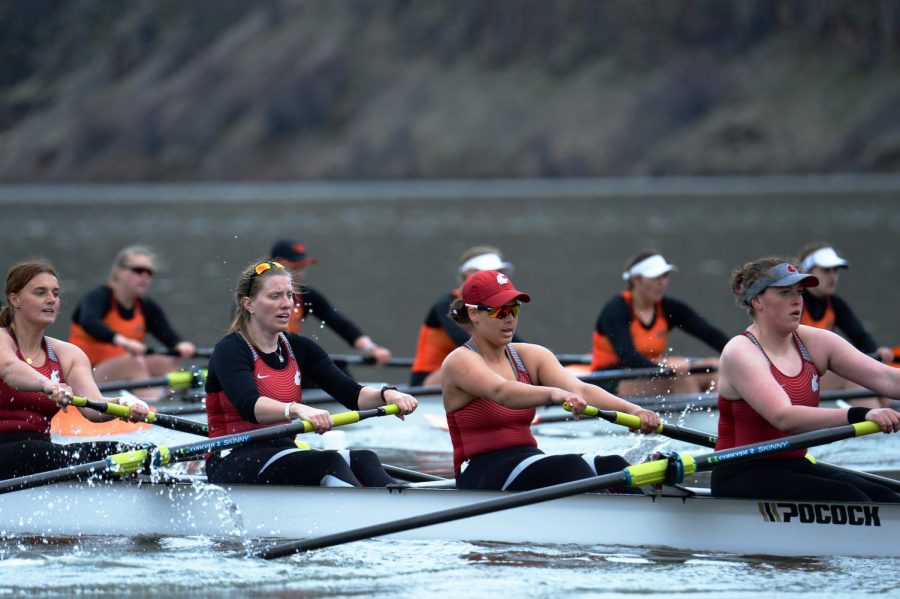 The second varsity eight team competes against the Oregon State University team during a regatta March 24 on the Snake River. This is one of three boats that could qualify for the NCAA Rowing Championships May 31 to June 2.

The WSU rowing team will compete at the Pac-12 Championship after nearly three weeks since its last regatta.

The Pac-12 Championship will take place at the Sacramento State Aquatic Center at 9 a.m. Sunday in Gold River, California. Viewers can watch the regatta on the Pac-12 Networks (D).

Head Coach Jane LaRiviere said she thinks the team is excited going into the conference championship, and the team has practiced in good weather the last couple of weeks.

“I think we’re rounding into form,” La Riviere said. “They seem to be finding a little bit more speed.”

In the last couple of weeks, she has seen the team improve with ease of movement in the boats. They have been more specific during practice rather than focusing only on getting as much mileage as possible, LaRiviere said.

She thinks all the boats have improved, and it’s a great time of the year to improve, she said. She focused on coaching the first and second varsity eights, LaRiviere said.

While the first and second varsity eights boats and the varsity four boat can qualify for the NCAA Rowing Championships, all the boats affect the team at the Pac-12 Championship, LaRiviere said.

She said WSU is a little bit of an unknown since the Clemson Invite was canceled, but she still feels good about where the team is.

“Pac-12s is always going to boil down to having your best performance when it matters most and it has to happen at Pac-12s, and then we’ll just let the chips fall,” LaRiviere said.

The rowing Pac-12 Championship will happen on Sunday in Gold River, California, and can be viewed on Pac-12 Networks (D).