A taste of Paradise 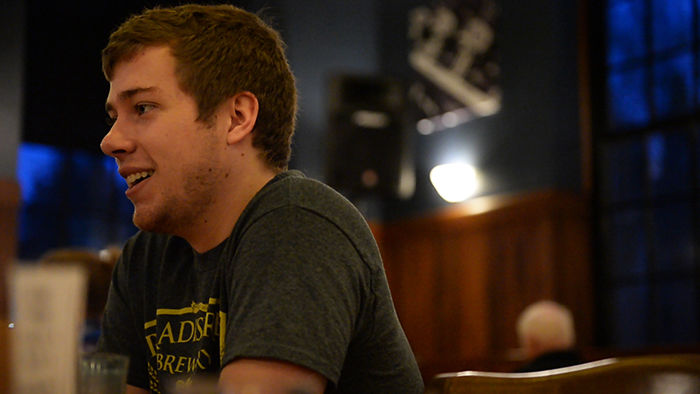 High quality brews that stand apart from your typical convenience store Bud Light can be found at Paradise Creek Brewery, a Pullman brewpub that takes pride in the beer it produces for the Palouse.

The brewery was established in early 2010 by Tom Handy, a brewer who had a desire to locally craft beer to share with friends and the community.

The hops and grain used in the production of this brewpub’s beer are all locally sourced, mostly from the Yakima Valley.

After deciding what type of beer to make, the next step to brewing Paradise Creek’s beer is to mill the grain recipe and then add it to a mash tun, a container used to convert the starches in crushed grains into sugars for fermentation, which results in crushed malt (or “grist”).

The next step is to mash. The grist is mixed with hot water in order to create “wort,” a sweet infusion of grain or malt, before being fermented.

The wort mixture is separated from the grain and boiled along with hops, which adds flavor and gives beer its well-known aroma and bitterness.

The hopped wort is cooled and ale yeast is added into a fermentation tank – resulting in alcohol, carbon dioxide and a transformation of flavors.

Soon after, the temperature must be dropped to allow the yeast to settle, before it is lowered even further in order to transfer the beer to brite tanks – where flavors are developed further and carbonation takes place. Then the brews are ready to be packaged by hand in bottles, growlers or kegs.

Currently, the head brewer fancies aged beers. However, Paradise Creek’s most popular beer at the moment is the Huckleberry Pucker – a sweet-and-sour Berliner Weisse crafted with a “kettle souring” method of brewing.

Other beer on tap at Paradise Creek includes their Kugar Kolsch, Pokerface Blonde, Scottish Stovepipe, Over the Hop IPA, Ruskie Juice and Culture Shock – to name a few.

All of the these brews are relatively inexpensive and have a higher alcohol percentage than your typical college beer.

“If you’re drinking our beer, you’re actually getting a bang for your buck,” said Jonny Handy, the owner’s son and a Paradise Creek bartender.

Each pint is sold for about $5. If patrons want an even bigger deal on beer at Paradise Creek, they may consider becoming a member of the “Mug Club.”

There are two Mug Club membership opening each year, one in the summer and one in the winter – it’s first come, first served. If a customer jumps on this opportunity in time, they must pay a membership fee of $55 for the first year, and $45 for the following years until their mug is retired (when they die or drop out of the club).

This membership grants a cool-looking mug that is eight ounces larger than a usual pint, $1 off growler refills and a 10 percent discount on all appetizers.

According to Paradise Creek’s website, “It’s been proven that drinking out of your mug makes you 15 percent more attractive.”

Lauren Ellenbecker is a freshman studying communication from Anchorage, Alaska. She can be contacted at mint@dailyevergreen.com.