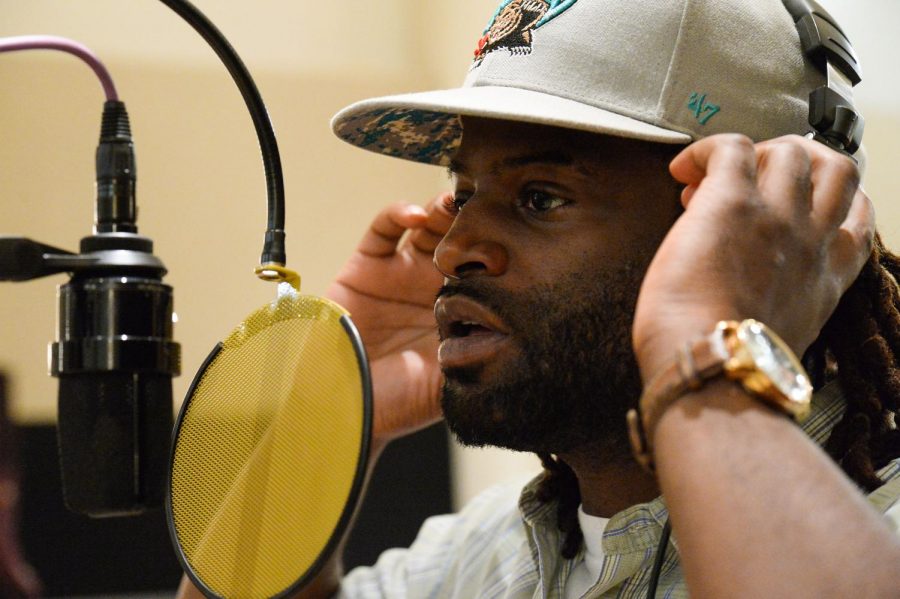 At the end of their original song “Soul Cry,” a wall of sound dropped out – piano, drums, bass, horns and a guitar solo. A second of silence passed before Donald’s voice on the recording caught the pair in the studio off guard.

“That solo was crazy,” he said in the outtake. “Did you see him over there scratching and clawing on that thing?”

NUU WAVE, the hip-hop jazz fusion group, has been recording with WSU sound engineer David Bjur for weeks and they’re paying by the hour. They plan to release their first single, “Right Now,” in June. They write all their songs and have performed all originals live at Rico’s, Etsi Bravo and house concerts in the area.

“It was random chance that I met [Donald],” said Hunter Thompson, NUU WAVE’s drummer and senior at WSU majoring in music.

Donald, a senior studying Apparel, Merchandising, Design and Textiles, knew Thompson’s roommate. A year and a half ago, Thompson found Donald freestyling in his living room with another MC. Thompson joined in on his drum set. This was the start of NUU WAVE.

Thompson put his feelers out, he said, contacting other music students he had played with in bands. NUU WAVE gained a bassist, Joe Ballestrasse, and a pianist who since cycled out of the group. Thompson also recruited the horns: Aragon on trombone and James Carter on saxophone.

“We have a slew of trained instrumentalists,” said Carter, a WSU masters student studying music with an emphasis in jazz. “We’re really invested in this, we’re majoring in it in school and putting a lot of money in it, and [Donald] is a master at his own craft.”

Donald started in music producing beats with a computer program and rapping on his own tracks. He said his dad bought him a home studio microphone package so he could work on his production.

The band began writing songs by translating Donald’s electronic beats into a live instrumental format, Thompson said. Since then, they’ve all started writing together.

Donald said their guitarist, Joel Roeber, brought in a motif that became the bones for their song “Caught Up.” Donald and Aragon collaborated on words and melodies. She said she’d never written music before joining the band.

Donald wants his lyrics to mean something. He grew up in the Tri-Cities and said when he was 14 police framed him, pinning a bag of drugs on him. He was convicted of a felony, drug possession with intent to deliver. In “Soul Cry,” he talks about feeling trapped in a corrupt and racist system. He said writing it was a challenge.

“I really had to dig deep within myself,” Donald said. “I had to hone in and be aware fully.”

He said his case is mild compared to others he’s heard, but he’s felt his conviction hold him back for much of his life. Toward the end of “Soul Cry,” the band gets quieter.

“I’m still locked in the system, just turned 28,” Donald says in the recording. “We can say the goal really ain’t to rehabilitate.”

Although some of his lyrics touch on heavy issues, Donald said his goal is to lift people up. Carter and Thompson said Donald is a charismatic front man. Both players perform in jazz combos, and they said Donald’s persuasion of the crowd makes for a different experience as an instrumentalist.

“We want the listener to leave with a feeling like, ‘aw man I feel like I just got rejuvenated a little bit,’ ” Donald said. “You can feel a little bit better equipped to take on your day.”

Donald can see the Palouse developing a more active music community, he said, and he thinks groups like NUU WAVE can jumpstart it. He hopes to support more local artists in recording and connecting with each other. He said NUU WAVE stands out in our area.

“People are starting to turn their heads, which is cool,” Donald said. “But we have a lot of growth to do as far as developing a music scene so it’s not so uncommon.”