The Daily Evergreen • May 23, 2019 • https://dailyevergreen.com/57189/roots/artfest-organizers-hope-to-enrich-community/

Participants walked to view pieces on display, competed for prizes 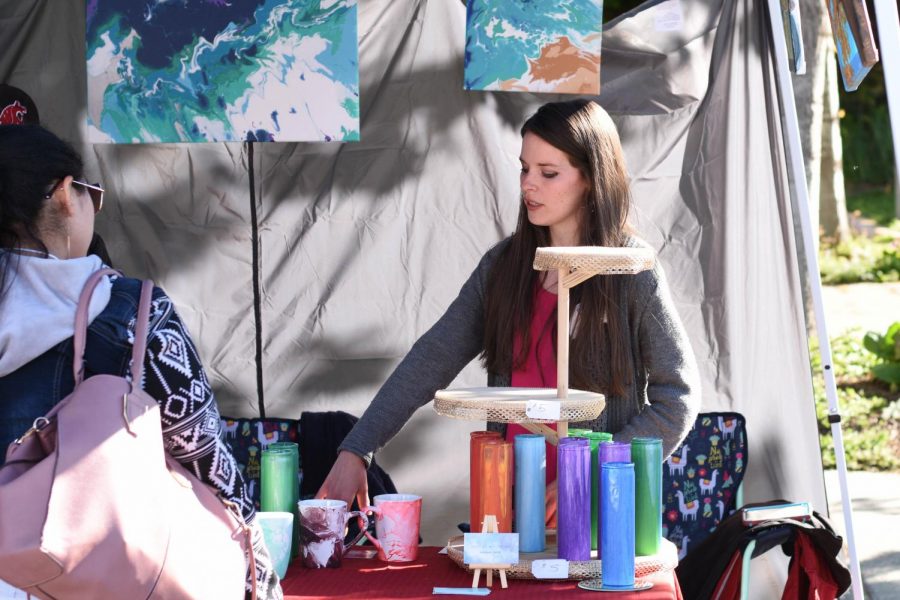 Artist Destiny Whitcomb talks to customers about her artwork Saturday at the Pullman art fest. Whitcomb has a degree in fine arts and works as a barista at Cafe Moro.

After rebranding the event, Pullman Arts Commission held its first annual ArtFest from Thursday to Saturday.

“It’s a community event that combines art commerce and community,” she said.

“We are trying to promote all of the arts, that’s why we changed our logo from ‘Art Walk’ to ‘ArtFest,’ ” she said. “We had some culinary arts participating — some performances — music, theatre and art.”

“This is the fifth year the Arts Commission has run it,” he said. “This is the second year we’ve actually done the street fair, we really wanted to do this and it happened.”

She said the art walk included 25 locations featuring local artists and their artwork. Conley said they displayed some of her art pieces at Roost Coffee and Market. Conley said she uses pen and ink and watercolor to create pictures of nature and business fronts.

Some of Boone’s metal sculptures, including an ox, were displayed in front of the Neill Public Library.

Bailey said this year’s ArtFest featured artists of all ages including high school, middle school and elementary students. She said two high school students participated in ArtFest as part of their senior project.

Conley said every student attending an art class in one of Pullman’s public schools had the ability to feature their artwork in Pullman City Hall.

Conley said locals who participated in the festival had the opportunity to receive prizes via a raffle sponsored by businesses.

She said participants of the walk had cards which businesses displaying artwork would hole-punch. Participants then got raffle tickets corresponding to the number of hole punches they received.

“Most take place in downtown Pullman, like on Main St. and Grand Avenue,” Conley said. “We also have some across town, but we tried to keep it pretty localized so people could walk around.”

There were over fifteen different raffles available including WSU football season tickets and gift baskets from the Neill Public Library and Salon Poppy. Winners of the raffles were notified on May 19 via phone call.

Boone said another popular attraction was the Beer Garden which was provided by Paradise Creek Brewery. The Beer Garden was located in the parking lot of Neill Public Library.

“People are in there drinking beer, listening to music and having a fantastic time,” he said. “You can pull up to a chair — sit and watch the nice, flowing, lovely, babbling brook roll by and listen to some great tunes.”

Boone said there were performances of live music all day Saturday on the Avista Main Stage in the Neill Public Library parking lot. He said some performers included the WA-ID Symphony, Highway 99, Ray Wallace and the Cherry Sisters Revival.

Conley said the Art Commission’s goal was to have 1,000 participants for ArtFest.

“We keep track because if a certain amount of people participate then we get a tourism grant,” she said. “Last year we got ten thousand dollars back.”

“It adds to the vibrancy of downtown,” she said. “It strengthens the economic vitality of the city.”

According to the Pullman Arts Commission’s event page, visitors of ArtFest are encouraged to attend the monthly Arts Commission meeting at Daily Grind Espresso on June 11 at 4 p.m. to give feedback of the event.