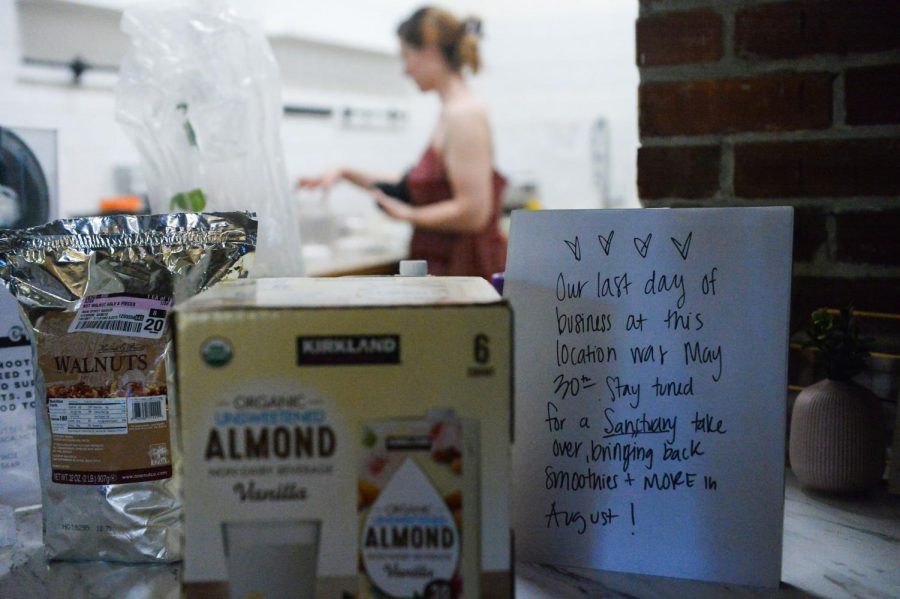 Owner Destiny Sternod lays out ingredients for yoga students to take for free as she cleans out the juice and smoothie shop.

Destiny Sternod, owner of Main Street Squeeze, said a typical Friday at her shop was a delight. During her opening routine for the juice and smoothie bar inside the Sanctuary Yoga Studio, one dance class would line up at her counter, full of 3- and 4-year-olds.

Wearing tutus, leotards and ballet slippers, the children would rush to the shop with excitement, Sternod said, and ask her for a refreshing “snoozie.”

Main Street Squeeze’s last day of business in Pullman was May 30 and she said, for now, that moment is lost.

“I hope that we served our purpose and I feel like we did,” Sternod said. “We’re definitely not done.”

As a WSU alumna, Sternod said she knows the struggle to find fresh and healthy food at an affordable price, particularly vegan food.

That is why Sternod opened Main Street Squeeze in 2017 in a storage unit of Sanctuary’s studio. She said she realized the following year she needed to expand and add locations as her business grew in popularity and positive reception.

“It’s crazy to see it go from just an idea, then to a storage room, opening and building a customer base, to now seeing it come to a temporary end,” she said.

For the last 12 years, Sternod has lived a vegan lifestyle and she said wanted her business to reflect that element to her life.

Part of that reflection came from getting local ingredients from local farms like Johnson’s Cooperative and Linc Foods, although it hasn’t always been easy, Sternod said. It can be difficult for farmers to sell to small local businesses like Main Street Squeeze on top of their normal obligations.

Her plan to expand involved finding a new location in Pullman. The hiccups and difficulties of her search led her to look for alternative locations like Portland. She said there weren’t many spaces open or willing to give her what she needed to operate a juice bar.

“Pullman is kind of an odd town as far as finding spaces goes,” she said. “It seems like a lot of change happens all at once and then nothing will change for a long time.”

While she hasn’t set a new Pullman location, Sternod said the search has picked up in the last month and she’s considering several places on Main street. She hopes to finalize a location by the end of 2019.

“It’s the only 100 percent vegan place to eat, so that’s pretty sad,” Fitzgerald said. “There is a lot of vegan food around Pullman, but it was nice to have one place where you could tell people everything is vegan and gluten-free.”

Fitzgerald said, with Main Street Squeeze closing, they’ll miss Sternod, one of their best friends, more than the food.

“It’s a good energy to be sharing a space with them,” Fitzgerald said. “[Sternod] is someone that I really admire a lot — I felt really blessed that I got to be in the same space as them.”

Sternod said that Main Street Squeeze has consumed “every waking and sleeping hour” of her life for the last two years, but she loves seeing her customers. She said she’ll miss them the most.

“When you have to wake up seven days a week and work 12 to 14 hours days, it’s super trying on you,” she said. “Being able to come in and see our customers’ faces makes it completely worth it.”

Happyday Juice Co. will be located on Fremont Street in Portland next to a yoga studio.