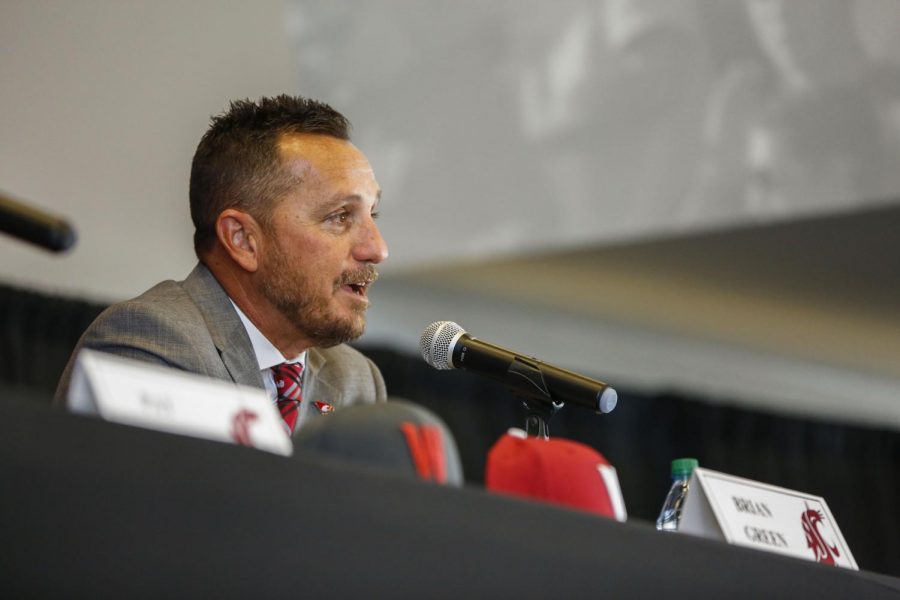 “It’s our responsibility to be great off the field and if we can do that, we can be great on the field,” new head baseball coach Brian Green said during a press conference Wednesday afternoon in the Rankich Club Room.

WSU announced Brian Green as the next head baseball coach for WSU on Tuesday afternoon.

Under his leadership there, the Aggies ranked No.1 in their conference going into the 2019 Western Athletic Conference tournament but lost to Grand Canyon and Sacramento State. New Mexico State made an NCAA Regional appearance in 2018.

In 2018, the New Mexico State posted a 40-22 overall record, 17-7 in-conference, won its first WAC Tournament title and made its fourth appearance in an NCAA Regional.

At the Division I level, Green has gone to nine NCAA Regional as a head or assistant coach.

“His program is about developing every aspect of his student-athletes,” Chun said.

Before arriving at New Mexico State, Green said he heard a lot of reasons not to go to but he believed they could win there.

During his years at New Mexico State, Green produced nine All-Americans including three 2019 first-team selection, 26 All-WAC honorees, a pair of Player of the Year selections, one Pitcher of the Year, one Freshman of the Year, and 22 WAC All-Academic selections. Twelve players continued into the professional ranks since 2016.

New Mexico State finished the 2019 regular season with a .356 batting average and led the country in batting average, runs, runs per game, hits, triples, on-base percentage, slugging percentage and hit by pitch. Defensively, the Aggies recorded a .974 fielding percentage after breaking the single-season school record at .977 in 2018.

“If you say you’re going to do something, then you do it,” Green said. “That’s how you build trust.”

Green has coached at a number of schools including UCLA, Kentucky and Oregon State.

During his press conference, Green said probably the most special experience was in Corvallis, Oregon. He worked in his first Division I role as a volunteer coach under Pat Casey.

Based on the facility, roster and leadership team it’s clear where they can go, Green said.

Green said he has four things that drive him: culture, teaching, recruit and development, and community.

During the fall after his team won 11 games, before one practice they were jumping around so aggressively that they broke the floor, Green said.

“We broke the floor and that same team won 34 games with that type of passion,” he said.

With teaching, Green said his philosophy is to teach players that the coaches want to help them. In the classroom, he said the players will have to meet their professors and get a picture with them.

When Green talked about recruiting and developing players, he used Joey Ortiz as an example of a player he recruited and developed who became the highest drafted player in New Mexico State’s history. The Baltimore Orioles picked Ortiz in the fourth round and was the No. 108 overall pick.

The team won the NMSU Athletics Community Service Award four years in a row under Green. He wants to continue community involvement at WSU because he said it is important for them to be in the community because it is their responsibility.

“It is our responsibility to be great off the field, and if we do that, we can be great on the field,” Green said.

He said he plans to make a Cougar acronym to reflect his values.

He is excited about the young but talented roster and has contacted about 60 percent of them, he said.