How one transgender queer woman saw Pullman change from 2005 to 2019, as she transitioned, traveled, and pursued equality 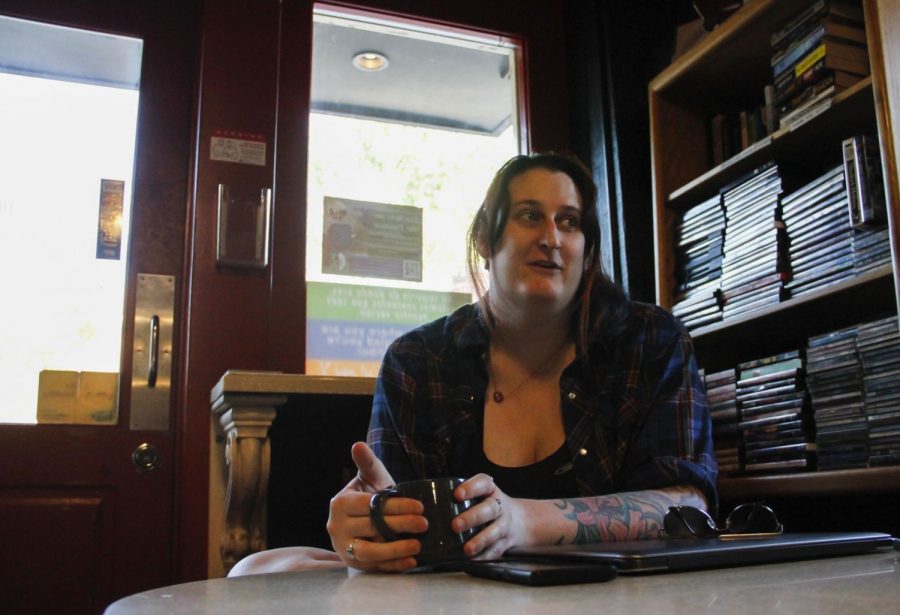 Tegan Horan discusses challenges she faced in her hometown and at WSU in 2005 at Cafe Moro Sunday morning.

Tegan Horan arrived at WSU in 2005. Since then, she helped develop a club for LGBTQ+ graduate students, studied abroad, and earned four degrees.

Horan, 32, is a transgender and queer woman. She came out to her parents when she was in high school, but had not started the transition process.

In her hometown of Las Cruces, New Mexico, Horan did not have any visible resources for her to access while she grew up. In high school, she only knew two openly gay students, who were ignored by their peers.

After she accepted her offer to attend WSU, Horan contacted the then-director of Gender Identity/Expression Sexual Orientation Resource Center, Heidi Schnebly. Schnebly assisted Horan with things like counseling and housing. Having a visible resource was a progressive step for her, Horan said.

In 2005, Horan moved to Pullman to pursue her undergraduate degree. She graduated early with a Bachelor of Science in genetics and cell biology in 2007 thanks to Advanced Placement courses in high school and summer classes. Horan said she wanted to finish as quickly as possible.

“At that time, I absolutely loathed Pullman,” she said.

During her time as an undergraduate, the Gay, Lesbian, Bisexual, Transgender and Ally Student Association provided her with a home away from home, Horan said.

Horan planned to start transitioning once she moved to Pullman and requested a single bedroom in a coed dorm because she thought that would be the least awkward as she transitioned.

Instead, Horan got a double room in a male dorm for her first semester. Partway into her second semester, she was able to move to McEachern Hall to have a safer environment to transition.

Even then, she was originally assigned a male-classified room. The two single rooms share one bathroom with an option to lock out the other occupant.

After she socially started transitioning, Horan was moved to a handicap room. For her, moving to a handicap room was insulting, but it was also a bigger room than her previous one, and it came with a washer and dryer.

Horan’s gender reassignment surgery and hormones were not covered by her insurance for the first several years, she said, and finding doctors who are competent in transgender health has been a constant struggle. As an undergraduate student, she had to go to Moscow to get her hormones.

In 2005, GLBTA was a small group for the LGBTQ+ community, which Horan said was mostly lesbians. Horan was the only transgender member of the club who was out, she said.

Horan did know one other transgender person on campus, but they were not open about it, she said.

Even in the GLBTA, this was a problem for her, she said.

Once, a new member of the club asked Horan if she “hated” seeing a cute girl and then realizing “that she’s a boy.”

“I was just sitting here being like ‘You know I’m trans, right?’ ” Horan said. “Like, what the hell are you doing?”

Horan tried to make the GLBTA more transgender-inclusive with things like the Transgender Awareness Week and Transgender Day of Remembrance, she said. These things had been done previously by the GLBTA or GIESORC before, but stopped when student demographics changed, she said.

Later into her undergrad, GLBTA expanded and became more visible on campus. When she first joined there were about five students, and when she left there were 20 or more students, Horan said.

“The campus as a whole, I felt, was more friendly to gay people,” Horan said. “It wasn’t as accepting as it is now but wasn’t like, as bad as it could have been.”

After her surgery, Horan developed a staph infection and went to an OBGYN in town. No one would see her and she had to go talk to her surgeon. Horan had surgery in Colorado but said she “got lucky” because the surgeon had an office in Seattle.

“But still, I then had to go to Seattle for a freaking staph infection that they could have just given me an antibiotic for,” she said.

Later after graduation, she started working as a lab tech in a genetics lab studying endocrine disrupting chemicals for a year. While she was working at WSU, Horan said heard of hate crimes against transgender men.

The group tried to focus on being transgender-, queer- and intersex-inclusive, Horan said. She heard it later evolved into Graduate Pride Alliance at WSU.

Horan said she was in Australia when the group changed to GPAWS. She went to grad school in Australia for two years and got her first Master of Science in genetics from the University of Adelaide. At this point, she was done with the medical side of her transition.

When looking for LGBTQ+ groups to join in Australia, Horan found that many people her own age went to bars and clubs, which were not for her. She ended up hanging out with the people who were in their 50s, 60s and 70s who had played a part in Australia’s first wave of gay rights activists.

“They were just really cool to talk to and listen to,” Horan said. “Anytime I was b-tching about something they’d be like, ‘Back in my day we had to hide everything.’ ”

She said it was inspiring to get the perspectives of older friends. They told her about trying to navigate one’s identity when there were no resources available to help, and when being LGBTQ+ was considered a mental illness.

Horan’s own hometown lacked the resources to help her understand her gender identity. But even though she felt isolated, she still had the internet to help her.

At that time, same-sex marriage was illegal in both Australia and the U.S. Horan said she thinks there are homophobic and transphobic people everywhere, but there are also many accepting communities.

“Once you find your niche, you can kind of build a very supportive, loving bubble,” Horan said. “But if you don’t have that bubble, then yeah, it feels pretty lonely. So, Australia felt that way. Pullman felt that way.”

In Australia, Horan was able to meet different people in the LGBTQ+ community. Her hometown, at the time, didn’t have one that she knew of, and in Pullman it was hard to meet new people because everyone knew who you were and who you were dating.

She said she matured during her time in Australia, and started going by the name Tegan.

One of her favorite memories was when one of her bisexual friends took her wine tasting and introduced her to an ice cream snack called a “Golden Gaytime” and the song “Detachable Penis” by King Missile.

When she returned to the U.S., she went to Virginia first to finish writing her thesis while she lived with her parents. This was a culture shock for her because she is not from the South. She landed in Virginia and saw Confederate flags soon after arriving, Horan said.

“I was like ‘What the hell? Where am I? What year is this? Why does anybody have this?’ So, it was pretty awful,” Horan said.

It was during the 2008 recession. Horan didn’t have any friends and couldn’t get a job in her field because she didn’t technically have a master’s degree. She ended up working at a dog kennel. Horan said she didn’t experience any discrimination during her time in Virginia.

Horan returned to WSU to do her second master’s in cultural anthropology in 2012. She was excited to try something new, she said, but she was also nervous to see how much the town had changed. She wondered if it would feel like home because she never really considered Pullman home before she left. She completed her Master of Arts in 2014.

She started a doctoral program in genetics in 2015 and graduated about a year ago. Horan will finish her first postdoctoral soon.

Her future goals include “a lot of book writing,” she said. She hopes to write a trilogy about sex and gender, with a primary focus on sex. She also wants to keep her two cats happy, do some art and get better at playing the violin, which she started as an undergrad.

When Horan first came to WSU, she said it seemed progressive toward the LGBTQ+ community compared to her hometown.

“It’s definitely a more welcoming place for the LGBTQ community, I feel,” Horan said. “It’s not a perfect utopia but I mean there’s a reason WSU got listed on the [Top 30-LGBTQ Friendly Colleges and Universities].”