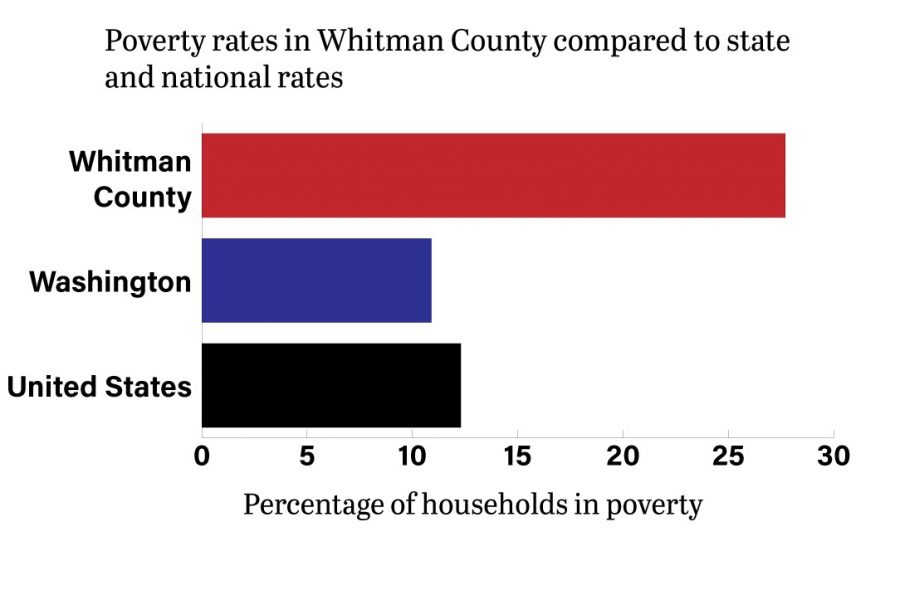 According to a study done by United for ALICE, Whitman County's poverty rates are more than double the average poverty rates in Washington state and across the country.

Whitman County has more than double the percentage of households living in poverty than the state average, according to a study from United for ALICE.

Across Washington, about 10.9 percent of households live below the federal poverty line, and in Whitman County, it is 27.7 percent, according to the study. Nationally, about 12.3 percent of people in the U.S. live in poverty, according to 2017 Census Bureau estimates.

County Commissioner Dean Kinzer said he attributes a large portion of this disparity to the university student population of WSU. The reason for this is that U.S. Census data treats students who are living off-campus and away from their families the same as other households.

Another study done by the League of Women Voters of Pullman showed that in 2016 the percentage of people in poverty in Whitman County decreased from 32.6 percent to 16.7 percent when adjusted to account for the university population.

Another goal of the United for ALICE study was to find out what percentage of the population makes more than the federal poverty level but less than what they need to afford basic necessities. The study classifies these individuals with the acronym ALICE: Asset Limited, Income Constrained, Employed, according to the study.

Among the basic necessities ALICE individuals have difficulty affording are housing, food, health care, child care, transportation and a cell phone, according to the study.

According to the United for ALICE webpage, the distinction between people in poverty and people who are ALICE was developed because traditional poverty metrics fail to accurately describe the situation of people who are struggling financially.

Kinzer said that about 50 percent of people who work in Pullman do not live in the city. A couple of years ago that figure was about 80 percent.

Lincoln said another way the city responded to poverty is by authorizing the creation of a warming shelter that was hosted in the city’s facility on Crestview.

Kinzer said another contributing issue in the county is the minimum wage and that it would be nice if the county could offer a higher level of pay, but that a higher minimum wage doesn’t solve poverty.

“We don’t have the power to change wages at the county level,” Kinzer said. “We are basically the government between the towns out here.”

Kinzer said people often say that having a four-year degree is enough to earn a comfortable living but getting that degree is not the best option for everyone. Attending vocational school or learning a trade is sometimes what people need to earn a decent living if college does not work for them.

Kinzer said people often buy land outside the city to live because the cost of living is lower.

“Everybody’s looking for their little piece of heaven,” Kinzer said.