CougarCard center will work with U.S. Bank to put numbers on Maxx cards 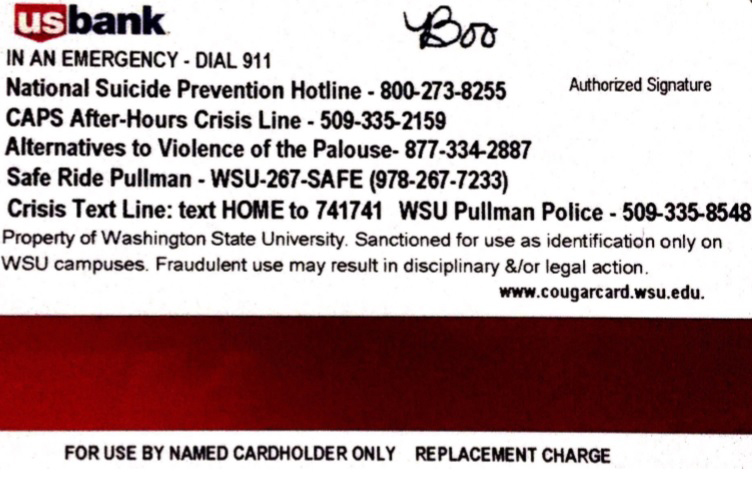 The new Cougar Cards, already in circulation, display a list of emergency numbers.

WSU’s student ID cards now come with emergency contact information printed on the back. These additions are in effect across all WSU campuses.

All CougarCards will come with the National Suicide Prevention Lifeline and the Crisis Text Line. Emergency phone numbers specific to the Pullman campus include the CAPS After Hours Crisis Line, Alternatives to Violence of the Palouse, Cougar Safe Rides and the WSU Police Department.

Parchem said he noticed multiple schools had emergency contact information on the back of their IDs.

“A couple of schools on their ID cards had things of various resources, and that was something that I thought was really needed,” Parchem said. “One of the main things that we wanted to do was bring awareness to resources.”

A visit from Texas A&M University’s office of admissions last September is what solidified the idea of having those resources on the back of IDs, said the former vice president.

Parchem worked with Catherine Dunn, former ASWSU director of Health and Safety, in choosing which numbers to put on the back of IDs, he said. Both felt the suicide prevention and crisis line were important national numbers to include, he said.

“Then we really wanted to have some resources specific to Pullman,” Parchem said. “Like Alternatives to Violence on the Palouse, the CAPS number for WSU, Cougar Safe Rides. So we have some national numbers, and we have those local numbers.”

By adding these numbers to student IDs, it would also raise awareness about the services, Parchem said.

“Cougar Safe Rides was something we kind of thought didn’t get enough attention,” Parchem said. “We really wanted to bring attention to the school program. Not only for you to utilize it, but for you to also volunteer.”

Chapman said they have issued over 1,000 CougarCards with the updated information. Incoming students are made aware of the new information during their WSU Alive! orientation session, she said.

“We just now started working with U.S. Bank on trying to find a way to get the numbers on the Maxx cards as well,” Chapman said. “Currently they’re only on the standard cards. It probably wouldn’t be as comprehensive, but I could see maybe doing the crisis text hotline and the national suicide hotline.”

Due to CougarCard Maxx cards being Visa branded, Chapman explained, they must include their own bank-related disclaimers.

The addition of emergency phone numbers to IDs comes before the introduction of the Improving Mental Health Access for Students Act in the House of Representatives on June 11.

The proposed legislation would mandate any college that prints student IDs to include the National Suicide Prevention Lifeline, Crisis Text Line and a mental health center phone number.