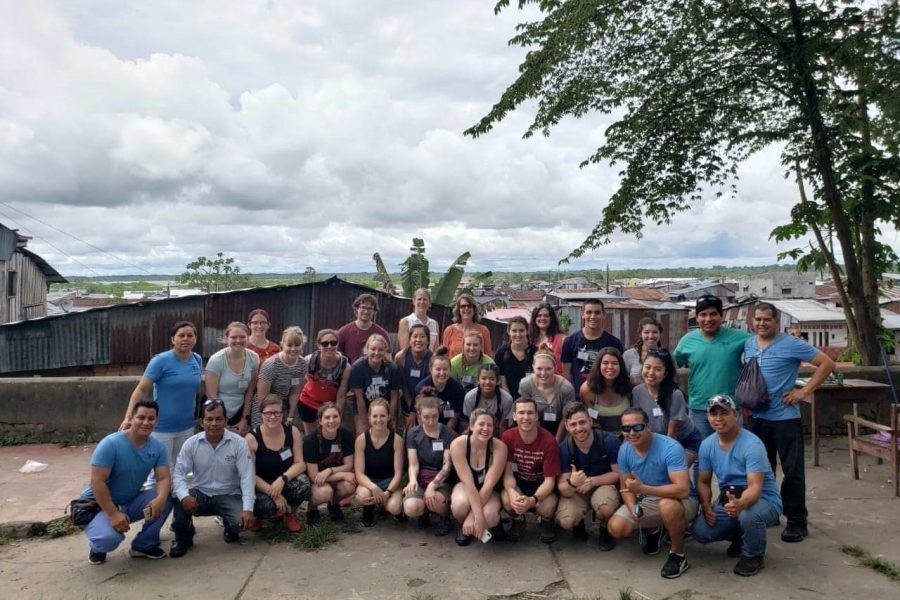 A group of volunteers from the People of Peru project poses for a photo while visiting the South American country.

WSU nursing and pharmacy students in Spokane partnered with the People of Peru project to set up five free clinics in Peru. These clinics would provide health care assistance to impoverished individuals and families.

Paul Opp, president of the People of Peru project, said they are an independent organization that aims to provide education, crisis intervention, health care and acute medical aid to those who do not have access.

Opp said the project has been in partnership with WSU for 14 years. WSU students who volunteered for the project could experience their direct influence on those in need, he said.

“The People of Peru project meets its stated goals through the expertise, the passion and the resources of organizations like Washington State University,” Opp said.

The organization primarily operates in the city of Iquitos and the surrounding jungle region, which has nearly three-quarters of a million people, Opp said.

“Iquitos is the largest city on Earth that has no roads leading to it,” Opp said. “The people in this region are essentially sequestered like you would be on an island. So, we have a big population and a lot of needs.”

This year the project had a team of 25 WSU nursing and pharmacy students that went out into the communities in and around Iquitos and set up medical clinics for the day, Opp said. He said the clinics attracted hundreds of people seeking health care every day.

The students sought to diagnose, assess and provide immediate medical aid to the individuals who came to the clinic, Opp said. The People of Peru staff subsequently followed up on patients who could not be aided at the clinics.

The team set up a total of four clinics in the city of Iquitos and one clinic in the surrounding region of the Amazon jungle, Opp said.

WSU student Linh Nguyen, a doctoral pharmacy candidate who was part of the People of Peru project this year, said the experience enabled her to work in collaboration with other medical students in a setting quite different from the U.S.

Nguyen said the project has a very deep positive impact on the people of Iquitos, who are always grateful for the medical aid and education the clinics provide.

“A lot of patients that we saw would give us hugs and kisses because they were so thankful that we put in extra time to assist and talk to them,” Nguyen said.

To better understand the health care needs of the people in the city of Iquitos, the students also performed community health assessments, by interviewing families and individuals living in the region, Nguyen said.

Opp said apart from the medical clinics, the students also had the opportunity to expand their health education by visiting numerous institutions that have health care provisions there.

The students go to a special needs school to see how those students are being cared for, physically and mentally, Opp said. They also get to visit medical clinics and government hospitals in the region and witness how very few services are available or accessible to impoverished regions.

Apart from health care assistance through medical clinics, the People of Peru also runs an orphanage for abandoned and abused girls and has educational programs that take students all the way through college, Opp said.

“We’ve graduated an ever-growing number of professionals that will serve their population,” he said. “They’ve learned their options, they’ve found their voice, especially the women.”

Opp said the organization is also amid an extensive construction project for a state-of-the-art surgery center in the Amazon jungle, which professionals from around the world can use to provide their specialties.