Future of education is in limbo 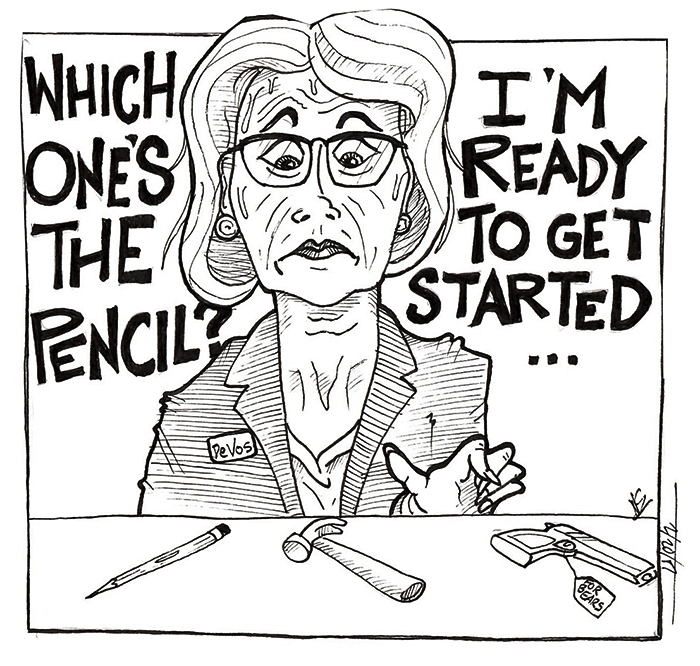 Inspired by one of Betsy DeVos’ tweets, which reads “Day 1 on the job is done, but we’re only getting started. Now where do I find the pencils? :)”

After a close race, billionaire GOP donor Betsy DeVos was confirmed as the 11th U.S. secretary of education.

The woman who has no work experience in public education.

The woman who, when asked by Sen. Elizabeth Warren, was privileged enough not to know anyone who had to accept federal student aid to fund their college education.

The woman whose family has contributed millions of dollars — $2.7 million, to be exact — in donations to GOP interests during the election cycle. Some, including Sen. Bernie Sanders, speculate that her family’s wealth aided in her confirmation as secretary.

The same nominee who was unable to answer clearly and precisely questions from Sen. Tim Kaine about same-standard accountability for all schools under federal funding during her confirmation hearing.

Her confirmation proves that logic, reasoning and compassion may be scarce or abstract concepts for the next four years. I do not believe any of Trump’s voters would be comfortable walking into a doctor’s office and being cared for by a doctor who has no experience practicing medicine.

The future of public education is in jeopardy and those who will be afflicted the most are those who were born into low socioeconomic statuses. Those who cannot afford to send their children to pursue higher education must now worry about how their children will be able to attend K-12 schooling.

DeVos said every American family should have the option of “educational choice,” according to Cosmopolitan. This is a sugarcoated way of advocating for the privatization of public education, where tax dollars and public funds would be diverted to private and, often times, conservative Christian schools that students have to be accepted into.

After an enlightening conversation with Tariq Akmal, the department chair of teaching and learning in WSU’s college of education, I learned that charter schools have not, in fact, outperformed public schools.

When asked what kind of person he believes should be secretary of education, Akmal said, “you’d have to be somebody who understands the intersections of politics, education and economics. Schooling in America is really a matter of resources. Your zip code matters and it shouldn’t.”

DeVos will be in charge of vital resources the American youth needs in order to have a fulfilled education experience.

Her interest in the privatization of education is dangerous to low-income schools where students already lack resources — something DeVos would know if she had stepped foot in a low-income public school. Those who are unable to afford the luxury of private schools are likely to have a difficult time attaining a quality education.

“I have decided, however, to stop taking offense at the suggestion that we are buying influence,” DeVos wrote in an essay for Roll Call in 1997. “Now I simply concede the point. They are right. We do expect some things in return. We expect to foster a conservative governing philosophy consisting of limited government and respect for traditional American virtues.”

Not only is this statement corrupt in itself, the issue with this ideology is that those who do not fall under “traditional American” are likely to suffer wherever DeVos is exercising her privilege as a billionaire.

Not only is it important to keep politics clear of financial conflicts, it is also important that our politics are kept clear of inexperienced people who do not have the best interests of working people in mind.

Editor’s Note: A board member at a charter school has asked that we clarify charter schools in the United States are publicly funded and privately run.

Basheera Agyeman is a junior comparative ethnic studies major from Accra, Ghana. She can be contacted at 335-2290 or by opinion@dailyevergreen.com. The opinions expressed in this column are not necessarily those of the staff of The Daily Evergreen or those of The Office of Student Media.