Bus fares will be waived on July 4, not in service during fireworks show 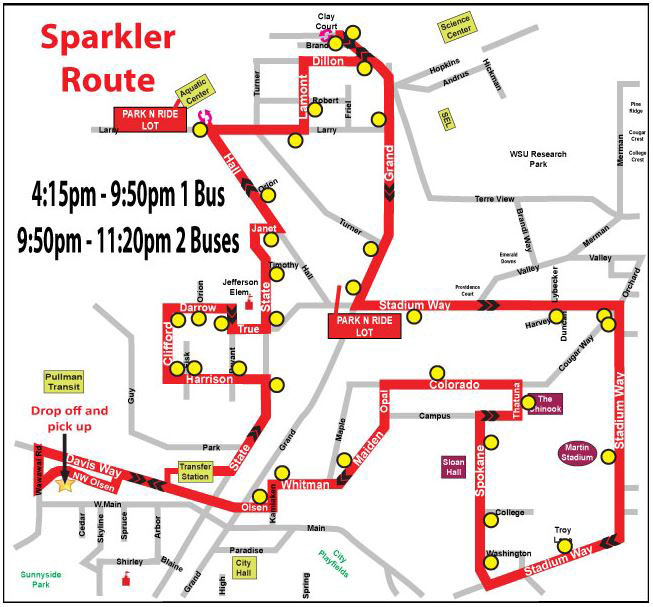 COURTESY OF CITY OF PULLMAN

Pullman Transit has routes in place for Independence Day Service to Sunnyside Park. The Sparkler Route is one that runs from 4:15pm to 11:30pm.

On July 4, Pullman Transit will be operating on holiday services.

Brad Rader, Pullman Transit operations supervisor, said buses are currently running community routes for the summer, which includes Blue, Loop, Paradise, Silver and Gray Express. He said on July 4, Wheat and Lentil will be the only routes running from 10 a.m. to 5:30 p.m.

Rader said holiday routes including Sparkler and Firecracker will begin operating at 4:15 p.m. The Roman Candle route will begin running at 5:15 p.m.

He said the Sparkler runs the same route as Blue. The Firecracker is similar to Loop with the addition of driving through Pioneer Hill. The Roman Candle route will service stops across Apartment Land and Bishop Boulevard.

“At the end of every one of their routes, [the buses] will go up to Sunnyside Park and drop patrons off,” he said. “They will do that all the way until the fireworks show starts – somewhere between 9:30 to 9:50.”

Rader said buses will not operate during the fireworks show, but will restart after the show ends. He said passengers can find the buses on Olsen Street by the Coast Hilltop Inn where they were dropped off.

Rader said a coordinator for Pullman Transit will be present at the Sunnyside fireworks show to ensure the buses continue running until the last passenger arrives to their destination.

He said all bus fares will be waived for the day, but donation cans will be present for those who want to contribute.

More information on bus routes and alternative transportation services can be found at https://www.pullman-wa.gov/departments/pullman-transit .