Vigil protesting detention camps to be held in Pullman 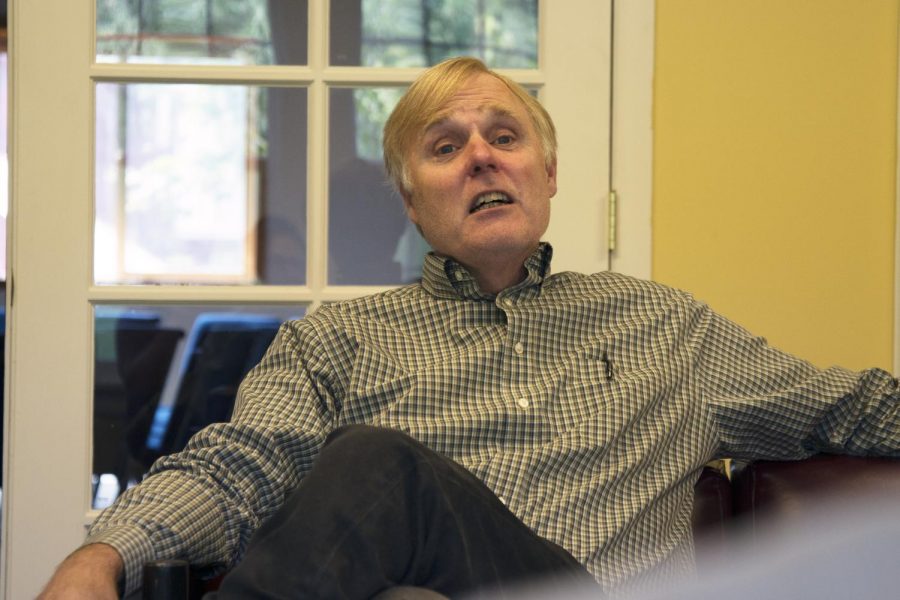 Stephen Van Kuiken, minister for the Community Congregational United Church of Christ, discusses why he believes there's a need for public awareness of the child separation policy at the Mexico-US border during an interview at the church Tuesday afternoon.

Community groups will host a vigil 7 p.m. Friday at Pine Street Plaza as a protest to the treatment of immigrant detention camps at the U.S.-Mexico border.

The Community Congregational United Church of Christ and Palouse ProActive will take part in Lights for Liberty: A Vigil to End Human Detention Camps, which will be a global event.

As of today, there will be at least one Lights for Liberty vigil in every state and in 15 countries, including France, Israel and Mexico.

Rev. Stephen Van Kuiken of the CCUCC is also one of the event organizers and said that after noticing the Lights for Liberty coalition, he decided there should be one in town.

“A couple of weeks ago I saw it pop up on my feed on Facebook,” Van Kuiken said. “As a matter of faith for me, I think that this is a moral issue just like the other advocacy work I do in different areas.”

The minister said this event is for the community’s voice to be heard and to be with others who feel the same way about detention camps.

“A lot of times you see some of the stuff going on and you can feel so helpless,” he said. “You feel worn down and discouraged. Sometimes it’s good to be with other people who feel the same way you do.”

Van Kuiken has been to the U.S.-Mexico border most recently in April. During his trip, he visited BorderLinks, an organization that offers experiential learning by educating participants in border history, immigration policies and through other workshops.

“I think that as a citizen in this country we [need to] take responsibility for the laws and the policies that our government is implementing,” he said. “We need to let our voices be heard from Pullman to Spokane to Los Angeles.”

Instead of detention camps putting people in cages and behind fences, Van Kuiken said, they should have humane procedures when dealing with immigrants and refugees.

“I think it should be a much more hospitable environment,” he said. “When we were in Tucson there was a facility, the Benedictine Monastery shelter, and they had about 350 capacity and it was operated by over a thousand volunteers. They gave them medical care, they had clothing for them, a place for them to wash and a place for them to relax.”

Van Kuiken said he believes there is room for improvement in how immigrants are treated in detention camps and does not believe the US is above reproach.

“One of my mentors said ‘There are three kinds of patriots. The two bad patriots are the uncritical lovers and the loveless critics. But the best patriot is the one who carries on a lover’s quarrel with one’s country,’” he said. “I think to be proud means to continually improve it.”

Gabrielle Schilling, sales associate at Atom Heart Music, said the business is donating a public address system to the event. Schilling said they want to support anything that brings awareness to the issue.

“It’s sad to see our country resorting to treating people that way,” Schilling said. “No matter what you feel politically you don’t treat human beings that way.”

That is a reflection on humanity that we’re treating people like that who need help, she said.

“I hope the outcome [of the vigil] would make people feel more aware that they could actually affect something and it’s not this issue outside of U.S.,” Schilling said. “I never thought I would see our country treating people like that ever. It’s devastating.”