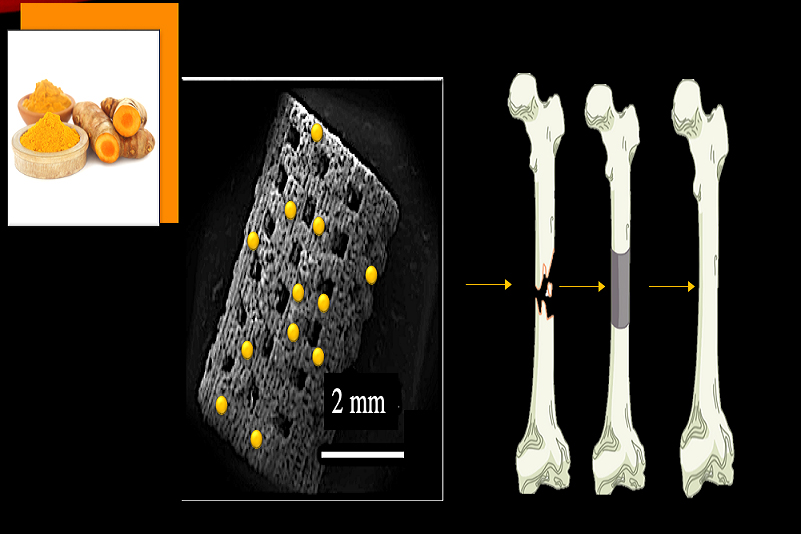 This graphic shows how curcumin, the main ingredient in the popular spice turmeric, can inhibit the growth of cancer cells in bones.

A new study conducted by WSU researchers in Pullman found that a common spice could help reduce cancer cell growth.

Curcumin, the main ingredient in turmeric, is an effective inhibitor of bone cancer cells and promotes the growth of healthy bone cells.

Attempting to use natural medicinal compounds for bone healing was the focus of the research, Bose said.

“Although it hasn’t been rigorously studied scientifically, it is known that the active ingredients in many of these compounds have antioxidants and anti-inflammatory capabilities,” Bose said.

Turmeric has been used in cooking and medicine around the world for centuries. Bose said they decided to use turmeric for the study because they wanted to examine its bone-healing capabilities.

She said the researchers loaded 3D-printed scaffolds of calcium phosphate with curcumin in the presence of cancer cells to study the ingredient’s effect on them. Special large molecules were used to control the release of the ingredient, Bose said.

Measures on the viability of the cancer cells were made at regular intervals to see if the ingredient was reducing the growth of cancer cells or killing any of them, she said.

“We were able to eliminate the growth of cancer cells over 90 percent without harming the healthy bone cells,” Bose said.

For Bose, studying natural medicinal compounds is a hobby of hers. It was this passion that enticed her to enter this field of research.

“In India, we know the benefits of turmeric,” said Sarkar. “We use turmeric in milk when we get a cold, old people use it when they have an inflammation or pain.”

Sarkar said plans are in motion to move forward with the “in-vivo” phase of the research, where they would study the effects on animal models.

Bose said she hopes the research will help thousands of bone cancer patients and people with muscular-skeletal problems, Bose said.

The research may also benefit the general population, who can use these natural medicinal compounds in everyday use to prevent tumor growth or for its antioxidants and anti-inflammatory capabilities, she said.

Bose said the study is a feat in interdisciplinary collaboration and she wishes for the research to move forward through similar collaborations between clinicians, physicians and biomedical companies.

“This is a critical time because, in today’s world, disciplinary boundaries are going away,” said Bose. “So, this type of interdisciplinary research really requires appreciation.”