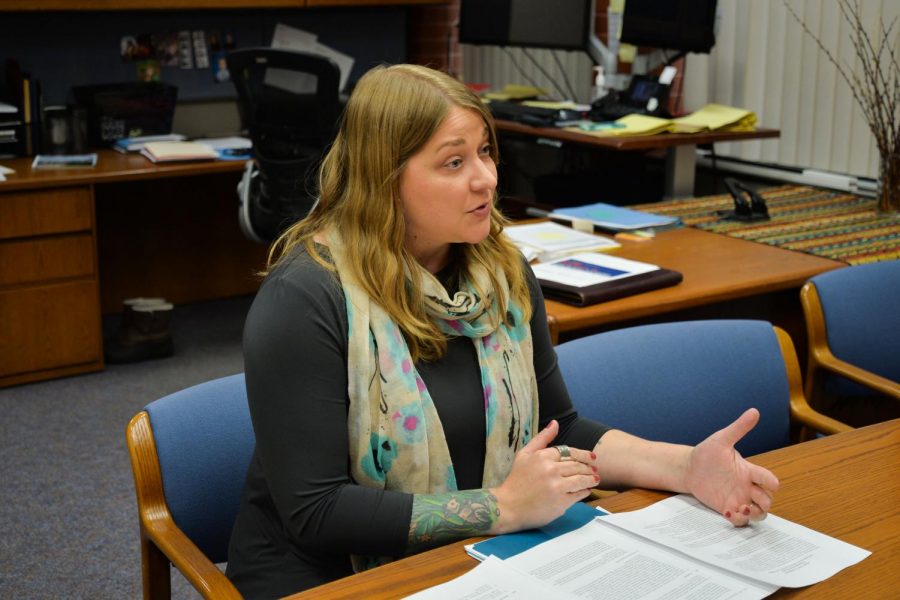 Holly Ashkannejhad, Director of Civil Rights Compliance & Investigation at WSU, discusses the role that the Office of Equal Opportunity plays in providing clarity to its purpose during an interview at her office Monday afternoon.

The Office of Equal Opportunity updated its procedures regarding sexual harassment as a part of a resolution agreement with the U.S. Department of Education’s Office for Civil Rights (OCR).

The federal review began in 2013 and looked at universities’ handling of sexual harassment and sexual violence reports over six years. Out of the 72 cases OCR looked at, it found four that were noncompliant. According to a report of OCR’s findings, the university did not resolve the noncompliant cases in a timely manner, thus violating Title IX.

According to the report, OCR expressed concerns that the university didn’t clearly communicate to respondents in complainant cases that they had an equal opportunity to present evidence, provide input and obtain information. The agreement to implement new procedures was made last year.

OEO oversees equal employment, affirmative action, fairness and equality throughout academics and employment at WSU, according to its website.

Director of OEO Holly Ashkannejhad said the resolution agreement ensures WSU takes the right steps to address the timeline concerns that OCR found and further clarify its procedures to both complainants and respondents.

According to the agreement, the procedural guidelines will now clearly communicate that complainants and respondents may present witnesses and evidence during sexual harassment cases, which will be considered when determining resolutions for cases.

In addition, the agreement says the university must clearly provide information to both parties regarding its prohibition against retaliation from either party involved. According to WSU’s Executive Policy 15, retaliation includes any act that would prevent a person from making or supporting a complaint.

The updated procedures will also clarify what solutions are available for both parties during the investigation process so they can avoid contact with one another.

“These were things we were already doing,” Ashkannejhad said. “They wanted it [the procedural guidelines] to be really clear to students.”

OCR didn’t require any changes to be made in how OEO conducted its investigations or resolutions, according to the report.

The university will provide training for the updated procedures to staff that have Title IX obligations according to the agreement. It will also require a cover letter that contains contact information for questions regarding Title IX sexual harassment to be sent to student and Greek organizations.

Ashkannejhad said that OEO’s procedures are all based on federal laws and regulations, so they contain a lot of legal terminologies that can be hard to understand.

“It benefits everybody if we can make it clearer,” she said. “If anybody has feedback or recommendations, we’re happy to accept them.”

Creighton said other outlets like hers at WSU, aside from OEO, are happy to help students in need.

Ashkannejhad said the university also hired more people at OEO to further address the timeline concerns OCR had. She said in 2014, five people were employed in the office. That number has now increased to nine and OEO is in the process of hiring another person.

This August, OEO will change its name to the Office of Civil Rights Compliance and Investigation.

“The name change came out of feedback we received that it wasn’t clear what our office did,” Ashkannejhad said. “We’re here to provide information on civil rights compliance and investigation.”