In response to mistreatment of immigrant children at the border, Pullman holds vigil 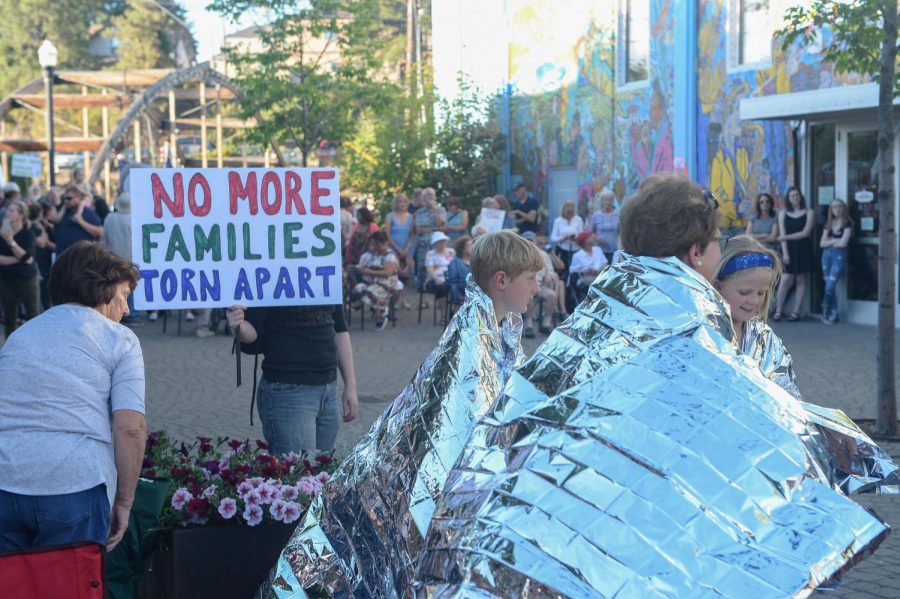 Pullman residents held a vigil to protest human detention camps on the U.S.-Mexico border Friday at the Pine Street Plaza. Over 100 people attended the event where two guest speakers spoke against the incarceration of immigrants.

According to an article from NBC News, over 300 migrant children were held in detention camps in Texas meant for 100 occupants, most of which had no access to showers or a proper meal.

Rev. Stephen Van Kuiken of the Community Congregational Church of Christ, and one of the organizers of the event, said those who are being detained should not be dehumanized.

“We believe that every woman, child and man should be treated with dignity and respect, and we call for the cruelty to end,” Van Kuiken said. “Human beings seeking help and protection do not belong in detentions or jails where they are harmed and dehumanized.”

Raul Jimenez, co-chair of the Crimson Group and a junior double majoring in wine-making and DTC at WSU, spoke at the event and said he hoped to humanize what is happening at the border.

“When you put a human connection to something that’s going on right now, that’s when you really start thinking about it,” Jimenez said. “Even though the people in camps are over there, there’s people over here that are being affected by it or other situations similar to that.”

At the end of the day people have a voice and they can make it heard with motions like today, Jimenez said on Friday. He said he believes Friday’s vigil accomplished the goal of spreading awareness.

“The number of people that [came] up to me was something good,” Jimenez said. “Most of the time people already know [Crimson Group] when we go to rallies around Washington state. These people came up to me and talked to me, got interested and [asked] ‘how can I help?’”

Casey Parsons, junior law student at the University of Idaho and legal intern at the Legal Aid Clinic at UI, also spoke at the vigil on Friday. During their speech, Parsons said the current immigration policy stems from systemic racism.

“This is not a problem that began in 2016 with Donald Trump and it’s not a problem that will end in 2020 with the next presidential election,” Parsons said. “The immigration policy and system in the United States has been deeply flawed, broken and racist for most of our lives and well beyond that.”

Parsons said it was important for Pullman citizens to be aware of their privilege in not facing deportation proceedings or any challenge to their citizenship or immigration status.

Parsons said people can help by monitoring interactions they see between the police or law enforcement agencies like ICE and people of color.

“Being there as someone who is witnessing what’s happening and making it known that people are observing law enforcement officers in these actions,” Parsons said, “I think goes a long way in sort of checking that behavior and gives people evidence that they can later use in court when litigating these issues.”