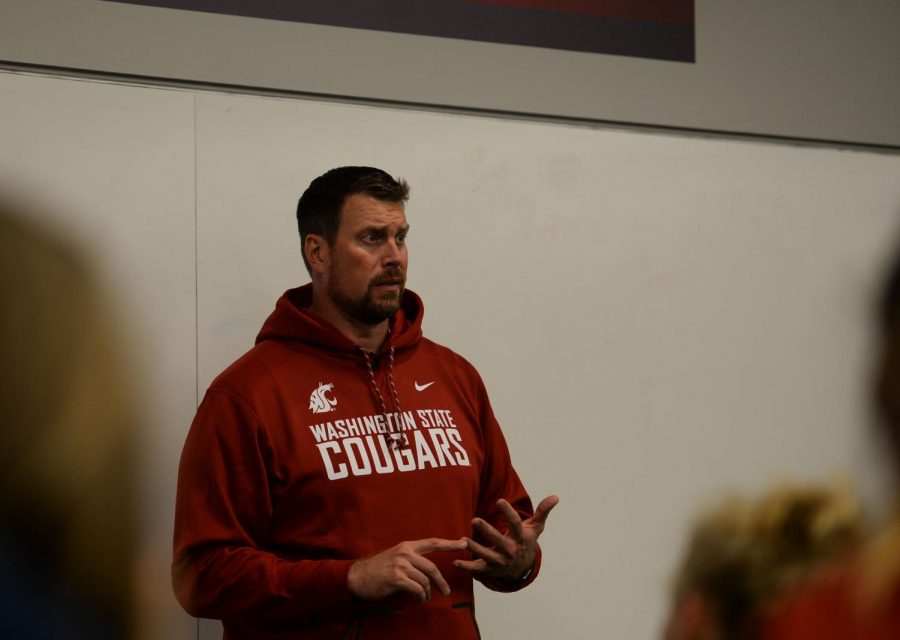 Former WSU quarterback Ryan Leaf, who came to talk to student athletes last fall, has been hired to be a football analyst for ESPN.

Former Cougar quarterback Ryan Leaf will be a college football analyst for ESPN and will be paired with play-by-play announcer Clay Matvick calling games mainly on ESPN and ESPNU, according to an ESPN statement.

Leaf, 43, worked for the Pac-12 Network calling games and co-hosting a show on SiriusXM’s Pac-12 channel.

Leaf was at WSU from 1994-97. He finished third in the Heisman Trophy voting behind cornerback/wide receiver Charles Woodson from Michigan and quarterback Peyton Manning from Tennessee in 1997 and led WSU to a Rose Bowl.

Leaf said that he graduated from WSU with a degree in broadcast journalism from the Edward R. Murrow College of Communication, according to the ESPN statement.

Later, Leaf fought drug addiction and spent two years in prison. After prison, he considered three paths for the future and took steps toward each one: the entertainment industry, law school and sportscasting, Leaf told The Associated Press.

“Ryan has experienced the highs and lows in the game of football, putting him in a position to relate to a wide range of situations players can find themselves in,” said Lee Fitting, ESPN’s senior vice president of production in the ESPN statement. “He will be able to rely on those experiences — including an unbelievable college career where he was an All-American and Heisman Trophy finalist — in his analysis, making him a tremendous asset for our team.”

Leaf said he reached out to former players like Joel Klatt, Brady Quinn and Kirk Herbstreit, who have transitioned to television and shadow them on assignments, according to the ESPN statement.

“I realized two things: I really wanted to do it, and I really felt like I could do a good job at it,” Leaf said in the ESPN statement.

Leaf lives in southern California with his fiancee and 21-month-old son, according to the ESPN statement.

In a Tweet Sunday night, Leaf said, “Thank you to everyone who supported me along this journey. Ton of gratitude in the Leaf household tonight. Thanks to @espn for giving a flawed human being a chance to be better today. #soberlife#cfb#letsgettowork.”