Old, isolated house in Moscow has been venue for local, international musicians for twenty years 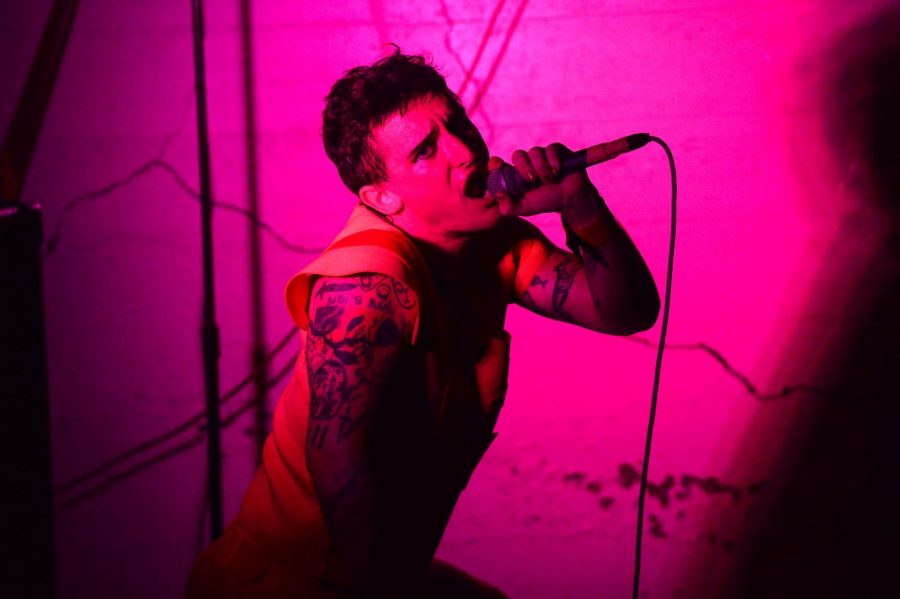 Singer and electronic artist Real Dom performs in one of his several looks at a house concert at The Bayou in Moscow on May 17.

The residents and venue operators at the Bayou swing open their screen door several nights a month to turn their farmhouse into a full-blown concert space.

They said it’s not too crazy. They’ve only had to kick a handful of people out.

One person tried to cut down one of the swampy trees that gave the venue its name, said Brynn Smith, homeowner.

“We had to hide the axe,” she said, laughing and smoking a cigarette on the side porch.

The old home attracts acts from all over the world, said Gabe Smith, resident and Brynn’s husband.

In the next few weeks, they’ll host bands from the Palouse and touring acts from Portland, Denver, Amsterdam and Calgary.

Just off of Troy Highway and situated near a gravel parking lot, the house sits far from any neighbors, tucked away on a marshy lot. In its isolation, loud music isn’t a problem.

“The general idea is that music is for everybody,” Gabe said. “Doing it this way rather than at a bar, it’s a little more for the music.”

Cycles of homeowners at the Bayou have hosted these do-it-yourself concerts for at least 20 years, he said.

In the early 2000s, University of Idaho jazz students developed a small ska scene out of the home.

Some of the older crowd still comes to shows, Gabe said, and they tell legends about the house. They’ve heard a rumor that a white nationalist group firebombed the house in the 90s, but they don’t know if it’s true.

In the years Gabe and his wife Brynn Smith have been booking shows in their basement, they haven’t run into major problems. They’ve never had issues with police, and rarely experience them with people in the crowd, he said.

“I’ve always lived in spots like this where it’s DIY,” Gabe said. “People get really into the music, but they kind of realize people live here.”

While listeners and performers chat and smoke outside, Brynn, Gabe or his younger sister, Ike, take cash at the door, $5 or more by donation.

Bands put their merchandise up for display on a table in the kitchen. Fellow, Gabe and Brynn’s Labrador retriever mix, paces between the kitchen and living room with his duck toy.

They’ve filled the living room with music: guitars, a banjo leaning up against a wall, an upright piano tucked in one corner. They play a vinyl  record upstairs while bands set up below.

The couple have decked out their space with eclectic decor that calls to mind midcentury hippie homes in San Francisco, but Gabe has been most inspired by punk aesthetics and do-it-yourself independent music scenes, he said.

Punk and metal bands play most often, Ike said. Ike is an electronic producer and DJ and played a set at the Bayou in May before another electronic artist and singer, Real Dom.

“I don’t try to dictate what happens here,” Ike said. “I just showed up to enjoy and participate and use the spot as a space to play and record music.”

Music is at the center of all their lives.

The couple met working in a coffee shop in Denver, Colorado, but got together playing together in a band called Hallowed Oak.

When Gabe’s sister came to UI for a doctorate, the couple decided to make the move to Moscow. They’re both working toward bachelor degrees in education at UI.

Gabe said all of his friends are musicians, so finding acts hasn’t been hard. They manage the crowd in a simple way too, he said.

“Our rule here is don’t be a jerk,” he said. “No creeps, no racism, no homophobia, no transphobia.”

They all want the space to be a safe and creative spot for people to focus on music, Gabe said.