Participants had opportunity to drive robot during program, learn about scientific method 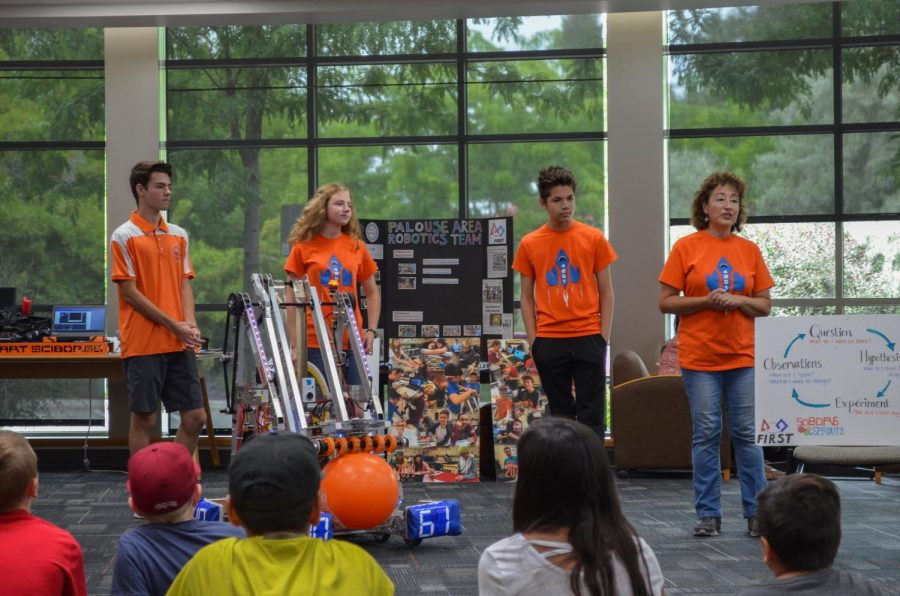 The Palouse Area Robotics Team does a demonstration at the Neill Public Library Wednesday afternoon. Helena Johnson, Alec Klaveano, Laura Harris, and Collin Weaver all make up a 4-H team which is a part of a Washington State University Extension.

Gears whirr and pneumatic pumps hiss as the machine wheels around the Heritage Room of the Neill Public Library on Wednesday, picking up rubber balls and dropping them into children’s hands.

Members of the 4-H P.A.R.T. (Palouse Area Robotics Team) SciBorgs 4061 presented the robot they designed, built and competed with, at a free event for children ages 11-17 as a part of the Summer Reading Program.

Alec Klaveano, lead computer-aided design member of the 4-H, said he has been on the team for four years and it is the reason he wants to be a mechanical engineer.

“My favorite part is being under the pressure on the competition field with thousands of people watching,” he said.

Children who participated heard members of the team speak about their robot, the design process and competing against other teams in the state.

Cash McCann, 11, attended the event and said his favorite part of the demonstration was getting hands-on and driving the robot.

“I think it would be cool to one day make my own robot to do things around the house and get me a Sprite,” he said.

Klaveano said this year’s challenge was that the driver was put behind a curtain so they couldn’t see what the robot was doing. In order to get around this, the team installed cameras so the driver could see through the robot.

Laura Harris, software team member and lead scout, said she loves being a part of the team.

“I’ve never felt overwhelmed with a bunch of guys around me,” she said. “I have just as much of a right to be here as anyone else.”

Both Klaveano and Harris agree they would not be where they are without their team sponsors. Building a robot costs about $5,000 and entering competitions can be as much as $5,000 as well.

Ahern said she hopes people took advantage of the opportunity to be exposed to robotics, learn more about what it takes to build them and see what is happening around the Palouse for children interested in engineering.

“It’s often described as the hardest fun you’ll ever have,” Harris said.