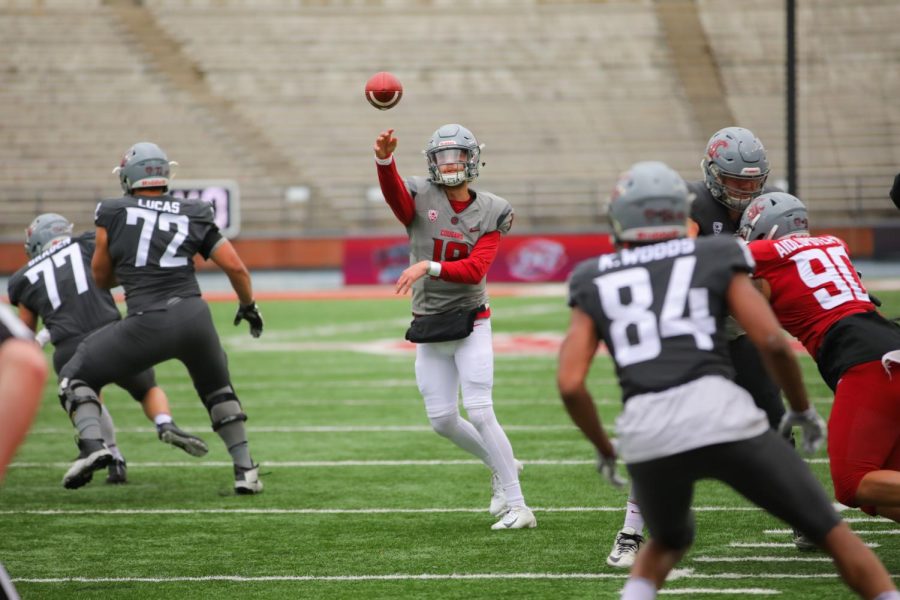 Redshirt senior quarterback Anthony Gordon completes a pass to redshirt freshman wide receiver Kassidy Woods who then scores a touchdown during the Crimson and Gray game on Saturday in Martin Stadium.

The WSU football season starts Aug. 31 in the home opener against the New Mexico State Aggies, but what does the rest of the season entail?

Are the Cougs a favorite? What’s the win-loss record? Will Gameday come back? And finally, will they win the Apple Cup?

Though redshirt senior Anthony Gordon won the battle for starting quarterback for the upcoming game against New Mexico State, this could change as the season progresses. This spring, many assumed the job was set for sixth-year grad transfer quarterback Gage Gubrud, but with the impressive offseason showing from Gordon, the season is anyone’s for the taking.

Gordon makes his first career start on Saturday. He is the only Power Five conference redshirt senior, non-grad transfer to make their first career start. The success of Gardner Minshew II meant Gordon played in just two games last season, one against San Jose State and the other against Colorado.

The Cougars had some major losses this offseason, with names like Gardner Minshew II, Andre Dillard, James “Boobie” Williams, Jalen Thompson and more going to the NFL, but with that, came some huge transfers like Gubrud and redshirt sophomore defensive lineman Lamonte McDougle.

Three-star recruit quarterback Gunner Cruz, cornerback Armauni Archie and redshirt freshman wide receiver Kassidy Woods round out an impactful freshman class. WSU has plenty of athletes to choose from after the record-setting 11-2 season they produced last year, the best school record in history.

Other things to look for this season are the rebalance of the defense and the strength of the offense.

The rebalance of the defense is going to be tricky, especially with five of last season’s top seven defensive backs gone. With Peyton Pelluer and Jalen Thompson being the biggest names leaving for the NFL, the secondary must adjust early if the Cougs want to be successful on defense this year, and not finish 115th in the Football Bowl Subdivision, or FBS, when it comes to run defense.

When conference play begins, the Cougars start out at home against UCLA, then travel to both Utah and Arizona State. After the two games on the road, they return to Pullman to face the University of Colorado and right after, go to the University of Oregon.

After Oregon, the Cougs travel to Cal and then finish with Stanford and Oregon State back home in Pullman before heading to Seattle for the Apple Cup.

According to the Football Power Index, or FPI, the Cougars are projected to win around seven games this year and rank number 31 overall. In the Pac-12, WSU is projected to finish third in the North, behind the favorite, Oregon, and the University of Washington.

The Cougs will start out ranked number 23 in the country heading into the first week from the AP Poll, but with all the matchups and unexpected results that can happen, that number will change after the first game or two.