Athlete of the Week: Brianna Alger 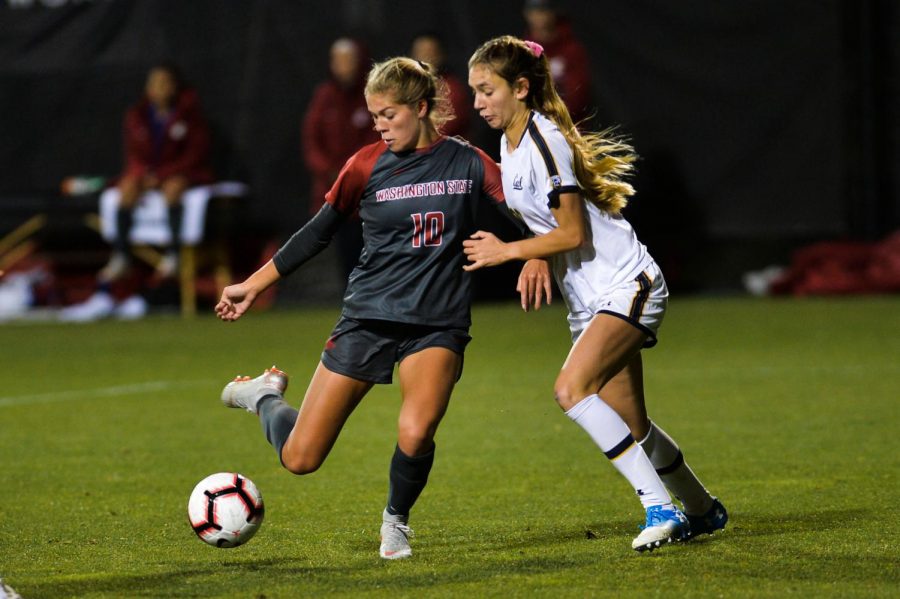 Then-sophomore forward Brianna Alger scores the final goal of the game solidifying the Cougars' lead and securing their victory with a final score of 4-2 in the game against California on Oct. 25 at the Lower Soccer Field. Alger moved to defender this year.

Junior defender Brianna Alger started off her season on Thursday with two assists in the WSU soccer team’s game against the Seattle University Redhawks. The Cougars won the game against the Redhawks 4-0, two of the goals made possible with assists by Alger.

In a post-game presser with WSU Athletics, head coach Todd Shulenberger said though he thought the game was sloppy overall, it was great to see two players finish off a corner kick.

In his mind, Alger will be the next Maddy Haro, he said.

Last season Haro led the nation in assists, and this year the Cougars need Alger to do the same. Alger is moving from the forward position to defender this season.

After graduating key players like Haro and Grace Hancock from the team’s backfield last year, returning defenders have big cleats to fill. The defenders could change game outcomes for the Cougars this season. In the last game, Alger proved she was on the right track.

Alger’s career features just four assists and two of them happened in the game against the Redhawks. This a good direction for the Cougars defense, as they look for key players to feed the ball to their strong attacking players.

Now an upperclassman, Alger is a veteran on a team with a large freshman class. Last season, Alger played in every game for the Cougars and started in 13 of the games. Though defenders are rarely the stars of the show, Alger uses most of the small number of opportunities she has, including a goal in last year’s game against Montana in the first round of the NCAA Tournament.

Though she hasn’t scored a goal yet this season, there’s only been one game. Her time to score will come.

Her strong performance last game makes her this week’s Evergreen Athlete of the Week.