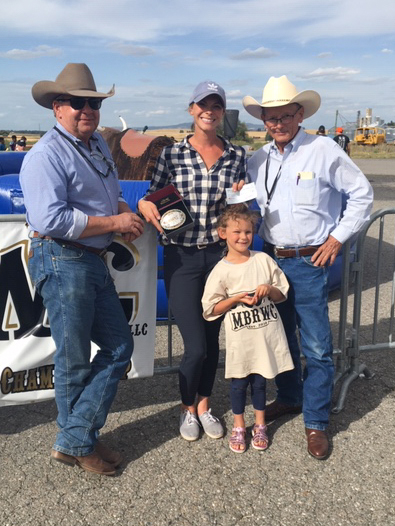 WSU equestrian coach Laura Moore won the mechanical bull riding championship on Saturday at the The Harvester restaurant in Spangle, Washington. Moore rode for 57 seconds. She originally entered the competition as a joke, she said, but ended up out-riding all 23 of the other competitors.

Laura Moore entered last Saturday’s mechanical bull riding championship in Spangle, Washington as a joke between her and her husband. At the end of the competition, she walked away as a champion and $4,000 richer.

When her husband dropped her off in The Harvester Restaurant parking lot, Moore wasn’t sure what she was in for.

Though, after the competition was over, some of the older cowboys in the crowd rooted for her in the end, Moore said.

Moore won the competition with a time of 57 seconds on the bull. In contrast, Mitch Chandler, a rough stock bull rider from Spokane, almost beat Moore but was bucked off the mechanical bull at 52 seconds.

The mechanical bull riding national championship allowed anyone to enter the contest.

“It’s open to anybody that wants to get in. From what I can tell, they’re just ordinary people,” said the event’s organizer George Chicha in a previous interview with the Spokesman-Review.

Along with the $100 entrance fee, the only other requirements were a western hat, long-sleeved shirt, and long pants, preferably jeans. Moore had all the necessary requirements.

Moore and her husband didn’t expect her to be the winner, but they thought she might have a shot.  As a child, Moore used to work for her parent’s equestrian center where she learned how to break horses and train the unruliest of them, she said.

Now, she coaches the WSU Equestrian Team. Moore specializes in English style riding, which refers to a style of riding made popular by countries in Western Europe.

There were 24 competitors who signed up for Saturday’s competition: 20 men and four women. However, two of the top finishers were women. Kyla Gabriel, who previously rode for Moore at WSU, took fourth in the competition.

“I didn’t really know about the contest, but then all I could think was ‘Go Laura!’ ” Phillips said.