Keeper is tied for second with 21 shutouts, 38 wins 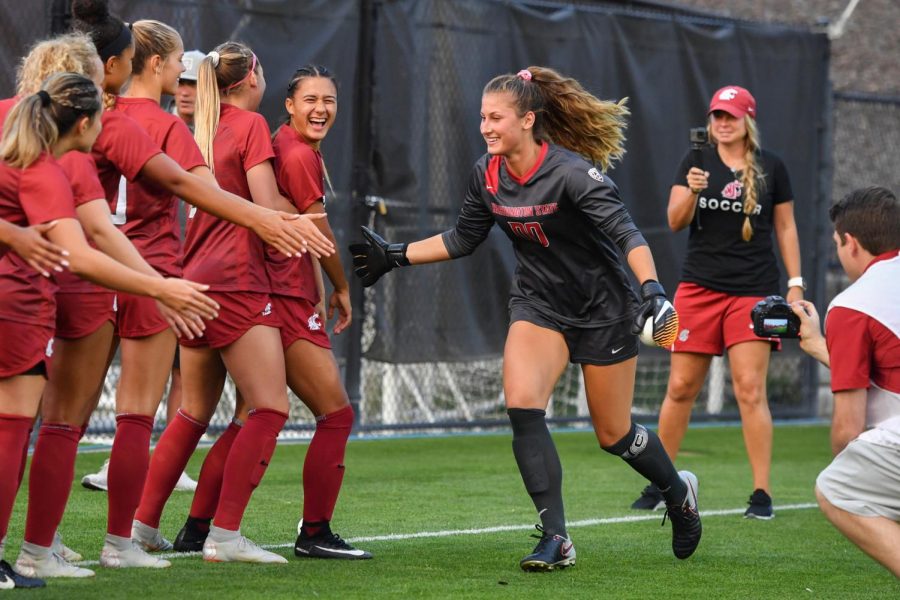 Graduate student goalkeeper Ella Dederick high-fives her teammates. Dederick returned for a sixth year to help herself reach her professional soccer goals of one day making it to the national stage.

If graduate student goalkeeper Ella Dederick’s soccer career was a person, it would be a sophomore in college. Dederick played soccer for the first time at age 3 and never looked back.

“I’ve always been around it, and I’ve always just loved it,” Dederick said.

The NCAA granted the 23-year-old California native a sixth year of eligibility after she tore her ACL in the fifth game of the season against the University of Idaho.

Prior to her injury she contributed to the Cougars’ five straight wins that lead to a 10-game winning streak and had two and a half shutouts to start the season.

Dederick ranks sixth in win percentage, second in wins with 38, fifth in saves, third in goals against average and is tied for third in shutouts for all WSU goalkeepers. In the game against Seattle University on Aug. 22 Dederick earned her 21st career shutout and is now tied with Katie Hultin (2002-05) for the second all-time in program history.

Coming back to the team for a sixth year is what Dederick needs to do to achieve her professional dreams.

“I envision myself being on that national stage one day,” Dederick said. “It was really hard to actually come back for a sixth year, but I knew I had to do it to achieve my dreams.”

Her teammates wanted Dederick to come back as well. The team this year is filled with freshmen and underclassmen in the backfield. Dederick’s teammates are happy to have her on the team for the season.

“It just gives her more knowledge, I’m a senior too, but it’s nice to still have someone to look up to,” senior defender Katie Jones said.

Leading a team is nothing new for Dederick, she was a team captain on her high school soccer
team and felt like she was in a leadership position on the WSU team since her redshirt freshman year.

“[Ella’s] a natural-born leader, so it’s nice that you start from the back and get even our sophomores to be leaders now,” redshirt senior Shayna Whieldon said.

Though she takes her role seriously on the team Dederick said she thinks she plays her best when she’s loose and having fun.