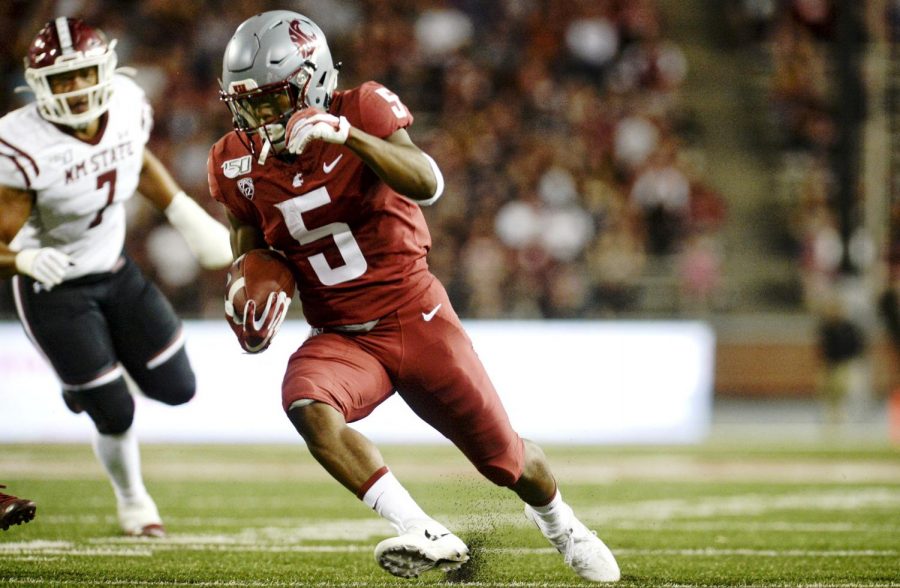 No. 23 WSU football opened up their season with a 58-7 victory over the New Mexico State University Aggies on Saturday night in Martin Stadium.

The Aggies won the coin toss and elected to receive the ball first. Their first drive resulted in a missed 51-yard field goal from senior kicker Dylan Brown.

The Cougars responded to the Aggies as they showed off their new offense, led by redshirt senior quarterback Anthony Gordon. He completed 29 of 35 throws for 420 yards and five total touchdowns.

“As far as the first time starting, [Gordon] is about as precise as anybody I’ve ever had, so I thought part was good,” head coach Mike Leach said. “There is a clarity to how he runs the huddle and he did a really good job putting [the football] into the endzone.”

New Mexico State’s next drive resulted in a rushing touchdown, making it a tie game 7-7.

Gordon and the Cougars took their next drive to the endzone, with only three plays and 75 yards, ending in a 48-yard touchdown pass to senior receiver Dezmon Patmon. He finished the night leading WSU with 103 receiving yards.

The WSU defense stopped the Aggies from scoring on the next four drives through halftime.

Sophomore running back Max Borghi recorded his first rushing touchdown of the season, following an 11-play, 80-yard drive from the Cougar offense making it 35-7 game at the end of the first half. Borghi finished the night with 128 rushing yards.

During the opening drive of the second half, the Cougars scored another touchdown from Gordon, completing a 20-yard pass to redshirt sophomore receiver Travell Harris, his second touchdown of the game, making it 42-7 Cougars.

The following drive, WSU’s Borghi found a hole and ran for a long 54-yard run, putting the Cougars in scoring position yet again.

Despite Borghi’s long gain, the drive would be WSU’s first without scoring a touchdown, settling with a 45-yard field goal completion from redshirt sophomore kicker Blake Mazza, making it a 38-point lead.

Coaches pulled Gordon from the game before the end of the third quarter. Graduate quarterback Gage Gubrud replaced him.

In his first play, Gubrud fumbled the snap and lost some yards. He came back the next play and threw a 26-yard pass for a first down. Redshirt senior quarterback Trey Tinsley replaced Gubrud for one drive in the fourth quarter.

Gubrud completed nine out of 11 passes for 76 yards. Tinsley completed one of three passes for 11 yards. Leach said he would like more samples of Gubrud and Tinsley in future games this season.

The Cougars will return to for their second home game of the season against Northern Colorado kicking off at 2 p.m. on Saturday in Martin Stadium.