Frat against drinking of all kinds removes member over coke 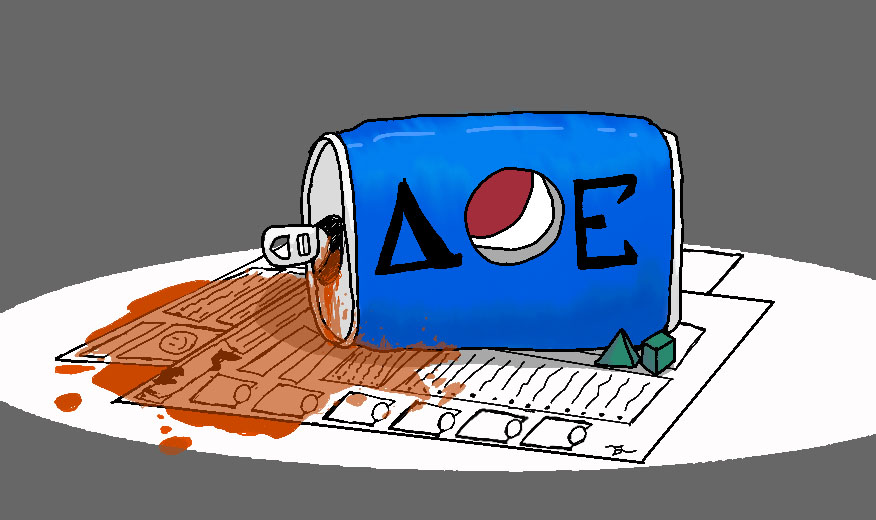 President of Delta Pepsi Epsilon bans excessive drinking of any and all fluids, members said.

A WSU student was kicked out of the fraternity Delta Pepsi Epsilon on Monday, after he attempted to drink a second can of Coca-Cola in one night.

The fraternity cited “irresponsible and reckless behavior” as the reason for removing freshman pre-med Josh Pepper.

According to fraternity president Brian Dews, the incident occurred Monday night, as DPE was kicking off the week with a particularly heated session of Dungeons & Dragons, during which Pepper reportedly drank a second can of Coca-Cola, knowing the soda was not caffeine-free and that he did have class tomorrow morning.

“All of us like to get wild at DPE,” Dews said. “There’s no denying that. But there is such a thing as taking it too far, and Josh doesn’t realize that. He has no self-control.”

During Labor Day weekend, members of DPE are allowed one soda or similar sugary drink per day. Pepper, saying that he was still thirsty after his first can, went for a second one, assuming it “wouldn’t be a big deal.”

“It’s soda,” Pepper said. “He’s acting like I drank a full bottle of vodka at the table. It’s literally a can of Coke.”

Upon seeing this, Dews reportedly slapped the can out of Pepper’s hand, ripped up his level six warlock character sheet, and told him to pack his things and leave that night.

“He had school tomorrow, and he knew that might keep him up,” Dews said. “And if he wants to play fast and loose with his life like that, that’s his problem, but I won’t let other members of this fraternity be dragged down with him.”

According to other members, Delta Pepsi Epsilon has very strict rules about drinking.

Pibbs said in his first year, he attempted to bring lemonade into his room, and was not only forced to dump it, but also was made to write a four-page essay on the dangers of drinking sugary drinks.

“[The president] gave me a grade on it too,” Pibbs said. “A 68, because I didn’t have strong enough sources on an essay about f-ckin’ lemonade.”

Pibbs also said that though he has received no punishment, he and other members have often received stern and disapproving looks from President Dews when seen with a glass of water. He also mentions never having seen Dews with any fluids during his three years in the fraternity.

Another member, who wished to remain anonymous, reported that Dews once sent him to a workshop on drinking, which he was released from early after explaining to the instructor that he was sent there for having hot chocolate in April.

Dews said that he understands his rules can be seen as strict but calls them necessary to maintain order.

“Cavities, diabetes and heart problems are all possible,” Dews said. “I once couldn’t sleep until nine just from a glass of iced tea. I don’t want other people to go through that.”

Pepper said he has no plans to apologize for the incident, nor does he plan on joining another fraternity. Instead he will opt for focusing on studying for his pre-med major.

He said, however, that he will miss the group’s epic Dungeons & Dragons sessions, and suspects it is the main reason other members stay.

“They are really fun,” Pepper said. “Like, really fun.”