OPINION: Everyone should wear a helmet when taking a Coug Bike

Over 1,000 Coug Bikes rented each week, but no one checks out accompanying helmet 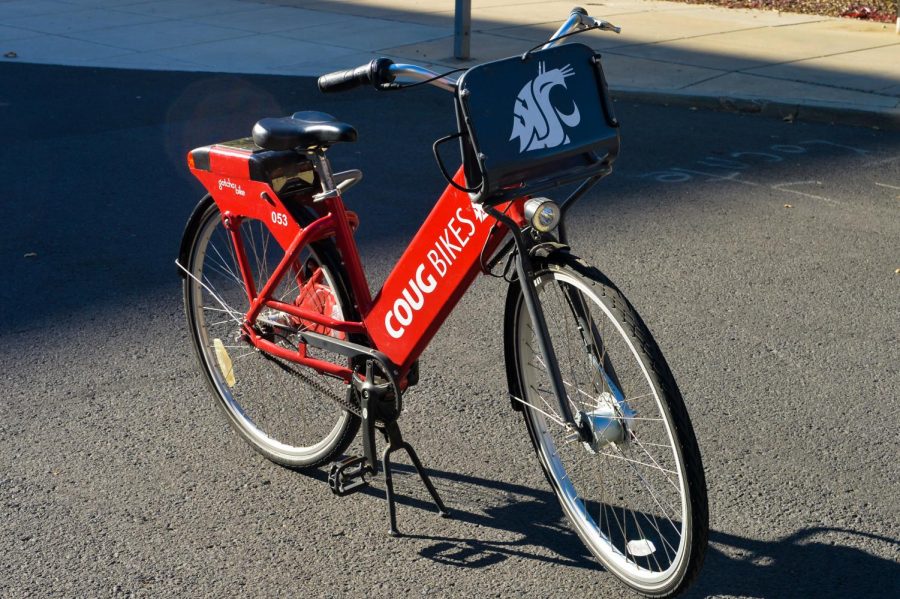 According to the Washington State Department of Transportation, head injuries account for 75% of bicyclist deaths. With thousands of students on the WSU campus utilizing Coug Bikes, it’s extremely important that students take the time to rent a helmet, or buy one themselves.

This story has been updated to reflect Washington State Department of Transportation’s correct acronym.

WSU is not a good campus for riding bikes. With its numerous hills and paths riddled with stairs, it’s a difficult life for bicyclist at WSU. That’s not to say that our campus isn’t brimming with bicyclists. In fact, WSU has many students that ride bikes regularly. No, the problem is that no one wears a f-cking helmet.

One of the reasons bicyclists are so common here is the abundance of bicycles. WSU has been running a bicycle share program in one form or another for over 12 years. The current version of bike share, Coug Bikes, began in June of last year.

With 100 Coug Bikes at 11 hubs — 10 on campus and one off — even students that didn’t come with their own bike can still enjoy the convenience and fun of bicycling. This opportunity is almost entirely for free, with students receiving four hours of free riding every day.

The numbers speak for themselves as to how popular the program is; at over 1,000 Coug Bikes rented just last week and over 28,000 rentals during the span of the entire program, according to Coug Bikes coordinator Donald Schmit, Coug Bikes is a popular program among students at WSU.

Even though Coug Bikes can easily distribute large numbers of bikes, it’s unable to provide helmets to those using their services. This exists not as the fault of this program but as a fault of bike-share programs everywhere. Most students seen riding around campus on Coug Bikes aren’t wearing helmets.

“As a biking professional I think helmet use is important,” Schmit said, “The problem with bike share is that there hasn’t really been a good method identified to provide helmets and bikes where people need them in a sanitary manner.”

Simply put, there aren’t helmets available at bike checkout hubs. However, WSU still provides rental helmets for students. Students can rent helmets at the Student Recreation Center, the Chinook and the Outdoor Recreation Center, for up to 48 hours, giving them plenty of time to enjoy a safe bicycle ride.

Most students aren’t even aware of the helmet rentals available at the REC centers, as is shown in the numbers of rentals over the last year. So, how many helmets have been checked out? Zero. There have been zero helmet rentals in the entire time Coug Bikes has existed. Not a single person has checked out a helmet in over a year.

The Coug Bikes program does a push for students to be aware of the different aspects of Coug Bikes — including helmets available for rental — a few weeks into the semester, with an email and notification on the Coug Bike app. Students receive information on these helmet rentals, yet they pay them no mind.

But do students really need to wear helmets? Everyone here is an adult, and Washington State Department of Transportation (WSDOT) essentially gives you the decision, but they certainly have a preference.

“Wear a bicycle helmet every time you ride. Head injuries account for 75 percent of bicyclist deaths,” according to the WSDOT website.

If there is no good way for students to easily get bicycle helmets the moment they decide to ride and the helmets that are available for rental are out of their way, what should they do? Students need to decide how important decreasing their chance of life-altering injury — or death — is to them.

Students that ride infrequently might only rent a helmet occasionally for a couple of days of cycling; while the more avid cyclists that ride every day should consider purchasing a helmet. Those that ride on paths absent of cars could probably squeak by without a helmet at all. It’s the student’s decision, but they need to be consciously aware of it.

We are all here at WSU to fill our brains with knowledge and to ensure our bright futures. It would be a shame to lose that all because we didn’t think twice about wearing a helmet.