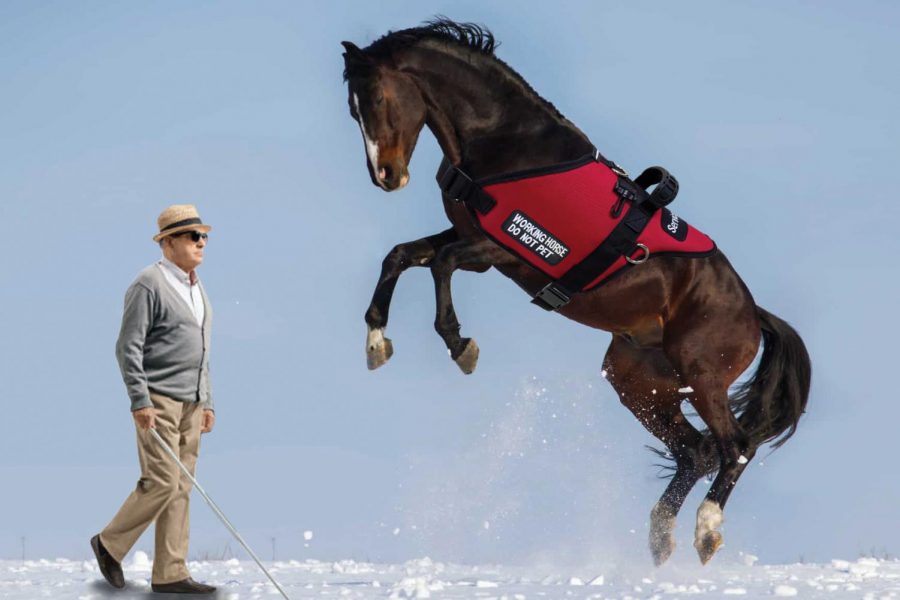 Henry Baltz, sophomore, was able to bring his snapping turtle to class to warn him of his seizures. The turtle does snap at EMT when they get close.

WSU’s Access Center made changes to its policies at a Monday meeting allowing students to register a broader range of fauna as service animals.

For junior Tina Hilfiger, this was great news.

“I’ve been missing my horse Beans since I transferred to WSU last year,” Hilfiger said. “Until the new policy came out yesterday, WSU was not horse-inclusive like my old college in Texas.”

Hilfiger said, however, that even in Texas, she had to board her horse in a separate room.

Hilfiger says she is ecstatic that she made the change.

“Beans stays in my dorm now,” she said. “My roommate had to move out to make room, but I was willing to make that sacrifice in the end.”

Another student, sophomore Henry Baltz, said he is now able to bring his snapping turtle Terry to class. It’s important, he said, because Terry can warn him of a major health event.

“He does snap at the EMTs when they try to get close,” Baltz said. “But that’s his signal. If Terry didn’t snap at the EMTs, they might never know I was having a seizure.”

Before Monday’s meeting, Baltz could not bring Terry into classrooms and had to leave the amphibian in a tank outside the door. The lack of university support made him feel embarrassed, he said, and isolated from his peers.

Students would often walk by Terry and him and stare, Baltz said.

“It’s already hard to lug a 50-gallon turtle tank up these stupid hills,” he said. “Nobody ever offers to help … except that one kid who got his finger bitten off up to the first knuckle. But Terry was just trying to protect me.”

The Access Center assured students and faculty in a campus-wide email that the number of service animals would not increase, just the number of places they could enter with their student.

“Already I’ve noticed more animals in my class,” Jenkins said. “By yesterday, the number had doubled. It was chaos. But it seemed rude to ask who actually needed them and who just bought a bootleg harness overnight.”

Hilfiger said she didn’t mind the other animals. But Baltz, who takes Jenkins’ class alongside Hilfiger, said the increase bothered him. He said some of the animals made Terry nervous, to the point where he snapped at Baltz.

“It wasn’t his fault,” Baltz said. “He couldn’t focus. All those extra animals freaked him out. Beans was cool though.”

The policy will be in effect for a two-week probationary period. Afterward, the Faculty Senate will meet to discuss potential changes to the policy. Professors will have 15 minutes to voice their concerns, should they have any.

Jenkins, at least, will.

“Because really, who needs a service alligator?” she said. “What is that for, a twelve-foot radius of protection? If you want that, just get a gun!”