Soccer looks to keep win streak alive in Spokane, has 23-1-1 record against the Bulldogs 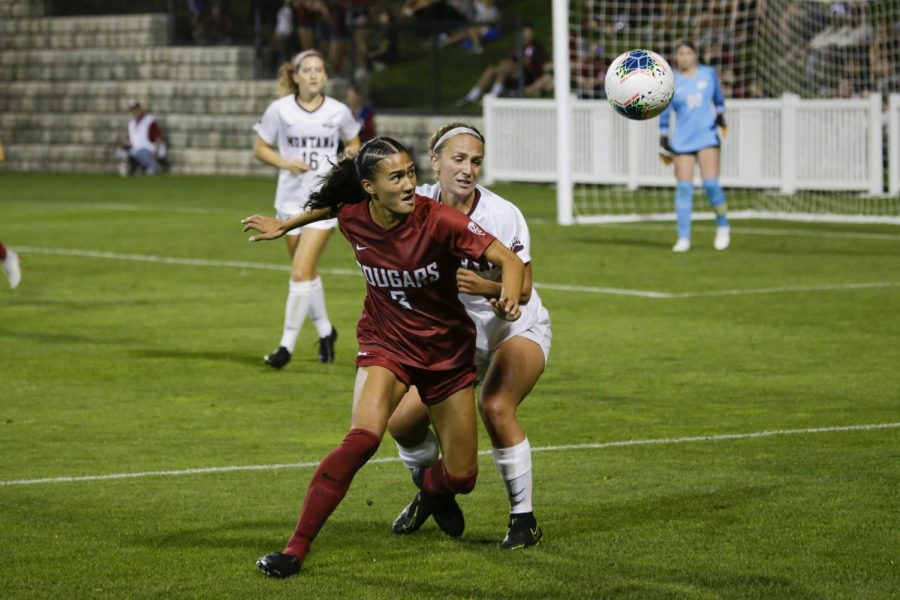 The Cougar women’s soccer team heads to Spokane to compete against the Gonzaga Bulldogs in a game at 7 p.m. on Thursday at Luger Field.

The Cougars outscored their last three opponents 16-3, with their last two wins against Montana (6-0) and James Madison (6-3) this past weekend.

WSU currently sits at No. 17 on the United States Coaches Poll. They enter the week as the best scoring offense in the country with 5.33 goals per game.

Similar to the Cougars, the Zags are also coming off a three-game winning streak. They scored on Montana with an early goal in the ninth minute from freshman Lauren Elwer and ended with a 1-0 win.

The Cougars have an all-time record with the Bulldogs of 23-1-1 and 104-9 goals scored. With 729 in attendance, then-sophomore Callie Best scored for the Zags in the first 19 minutes with a header off a cross from then-freshman Madeline Gotta for their home-opener of the 2016 season.

It was Best’s first collegiate goal in her career. Washington State had 13 attempts on goal while Gonzaga had 11.

As the Cougars prepare to head to Spokane, Head Coach Todd Shulenberger said in a press conference Tuesday morning that Gonzaga is a very good team, well-coached and organized.

“They have a bite and a grit to them … It will always be a fight over there for sure with two teams that want to try and improve their resume,” Shulenberger said.

The team has had nine different goal scorers so far this season. Schulenberger said he believes the team had the potential to do it and said the Cougars have young, veteran and transfer athletes contributing to the success.

However, he said the number of goals was a surprise, but he was not shocked by who scored them due to their performances in practice.

“It is going to be a good soccer game, and that is what I expect from both teams … It will be back and forth action, which it usually is,” Schulenberger said.

As a transfer from Stanford, graduate student midfielder Averie Collins said she is looking forward to this upcoming match as well.

Collins said this season has obviously been going well but is excited for the next match both offensively and defensively to be a challenge for her team.

“Gonzaga is going to be a test, so we are excited to be challenged, and hopefully Gonzaga can be that test for us,” Collins said.

She said her team is focusing to score some more run-and-play goals and combination play in the midfield and offensively.

WSU welcomes Michigan to Pullman next Friday at 7 p.m. at the Lower Soccer Field.