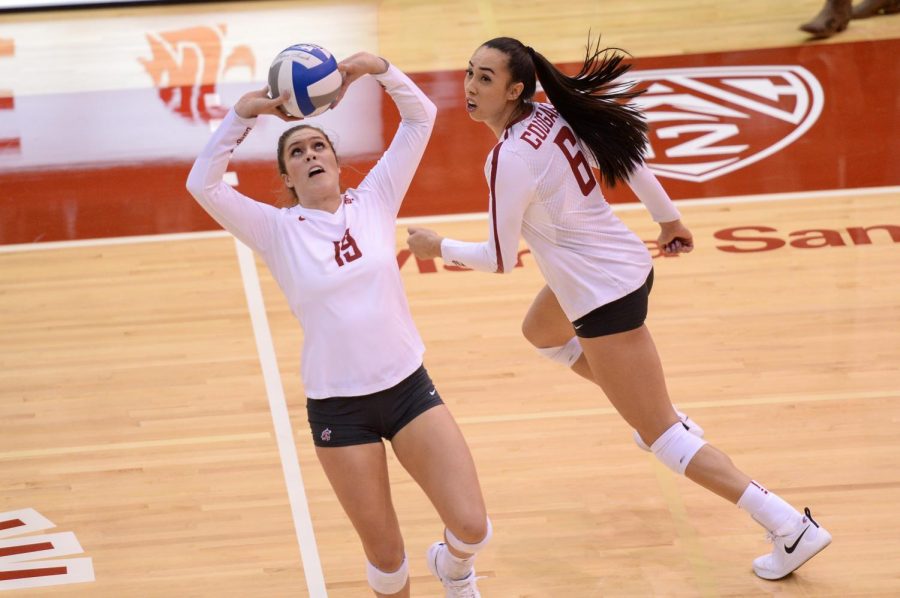 Then-junior setter Ashley Brown sets the ball in the game against Utah on Sept. 28 in Bohler Gym.

WSU (2-1) volleyball travels to play in the North Portland Marriott Invite this weekend in Portland, Oregon.

While they are at Portland, head coach Jen Greeny said she looks for improvements from her large freshman class.

“Just having that core group of returners, I think definitely helped all the newcomers settle in a little bit,” Greeny said.

The tournament features teams the Cougars would not normally play or have not played in a couple of years. All teams will be unknown even with the large freshman class.

Last weekend in the James Madison University Invitational, the Cougars won twice and lost once. Greeny said in her mind, the Cougars need to stay consistent the entire weekend to be successful.

“What’s nice about playing other people and some good competition is that you certainly come back with a long list of things to work on before the next weekend,” Greeny said.

On Saturday, the Cougars will look to beat the home team, the University of Portland. Last weekend, the Pilots played the first matches of their season in the Wildcat Invitational, in Ogden, Utah. Portland beat California State University, Northridge and hosts Weber State with scores of 3-1.

More aggression offensively is key for success in this weekend’s matchups, Greeny said.

The Cougars finish their weekend against their close neighbors, the University of Idaho. The Vandals spent last weekend at home and hosted the Idaho Volleyball Classic. They finished the weekend with one win and two losses.