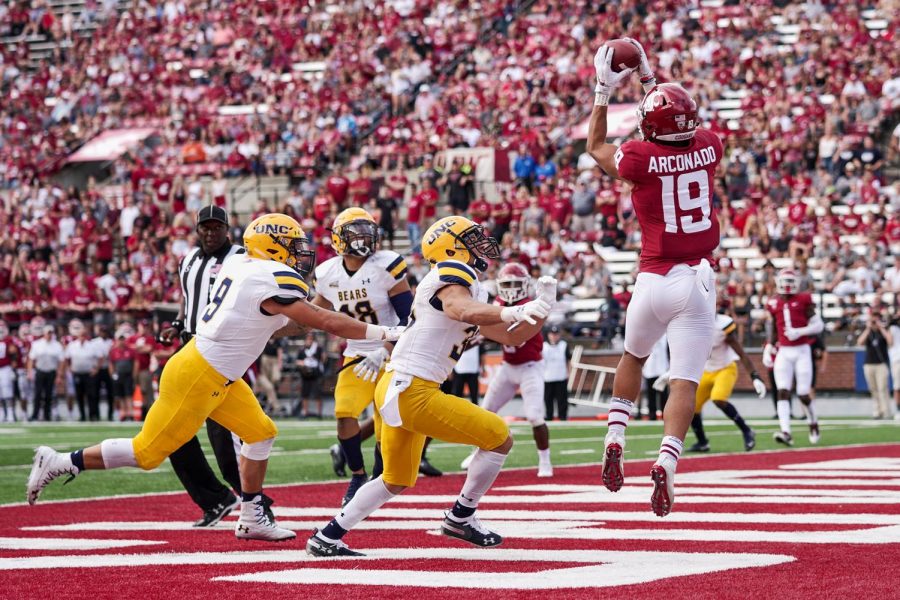 WSU played its second non-conference scheduled game of the season against the University of Northern Colorado Bears on Saturday, resulting in a 59-17 win for the Cougars.

With that touchdown reception, Borghi officially passed Keith Harrington for ninth-most catches by a running back in WSU history.

Head coach Mike Leach said the offense was a hit and miss, hitting a lull in the first half but then picking up as the game continues.

“I thought we came out really good the third quarter,” Leach said. “And then fourth quarter, we let a lot of guys play.”

The Cougars went into the half with a 24-10 lead, with a 2-yard touchdown run by Borghi earlier in the second quarter, and a last-second 20-yard field goal by redshirt sophomore Blake Mazza.

Gordon said during his lone interception, he was telling himself that interceptions happen and that moving on helps.

“That was a poor read on my part, and I probably had someone wide open in most cases,” Gordon said.

WSU opened the second half with touchdowns from a 7-yard pass from Gordon to Winston, and then a 3-yard touchdown run by Borghi.

Gordon finished completing 31 of his 39 passes with a total of 464 passing yards, four touchdowns and one interception. His ending passer rating was 208.1 and completed almost 80 percent of his passes.

Graduate wide receiver Brandon Arconado finished with a career-high 127 yards on eight receptions, with one being a 5-yard touchdown in the third quarter.

Winston had a total of six receptions, 113 yards and two touchdowns to add to a high-scoring game for WSU. Borghi finished with 51 all-purpose yards with three touchdowns.

Borghi said he was excited scoring three touchdowns in Saturday’s game and gave most of the credit to the offensive linemen protecting him.

“I really didn’t do much. It was just the O-line. They blocked well and kind of just popped it in,” Borghi said.

WSU closed out the game with a touchdown from a 32-yard run from transfer redshirt junior Deon McIntosh with 1:23 left to go. It was his first touchdown as a Cougar.

The Cougars’ next game is scheduled for 6:15 p.m. Friday at NRG Stadium in Houston, Texas, a neutral site, against the University of Houston Cougars. The game can be seen live on ESPN.