Volleyball sets up for great season 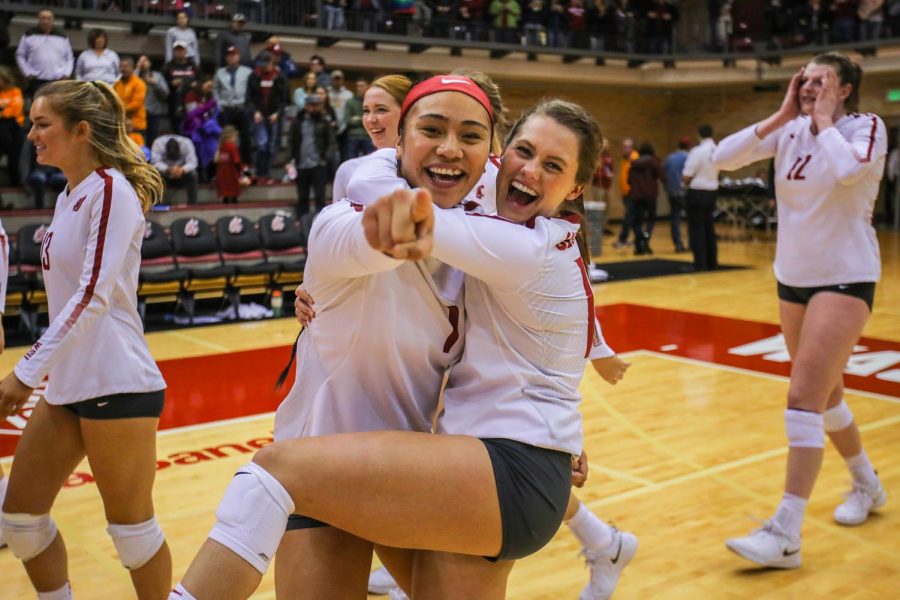 Then-sophomore outside hitter Penny Tusa and then-senior defensive specialist Abby Phillips celebrate after the win against the University of Tennessee on Dec. 1, 2018, in Bohler Gym.

The WSU women’s volleyball team won all three of their matches this weekend at the North Portland Marriott Invite in Portland, Oregon.

The Cougars had 14 service aces in the match, coming close to the record as the second most all-time in team history.

The second set showed similar results. Redshirt freshman libero Aria McComber had two aces early on to help the team get a 7-1 lead. Blocks from freshman outside hitter Alexcis Lusby and freshman middle blocker Magda Jehlarova continued to help the Cougars with a confident front-line defense. Pukis and Urias ended the second set 25-12 with a strong block for the Cougars final point.

Utah State fought back in the third set. The Cougars started behind trailing 5-0. With many ties and changes of score during the third set, the Aggies defeated Washington State at 29-27.

The Cougars came back with a vengeance in the start of the fourth set with a 5-0 lead, with strong defensive from senior libero Alexis Dirige. Although the Aggies had many runs, the Cougars finished on top with 25-18 and took home the 3-1 victory over Utah State.

Though there were steady ties throughout the first set from both teams, WSU found a rhythm at 13-13. The team went a run with Jehlarova and Lusby completing 4-0 kills. Urias and Bradley scored multiple points for their team. The set ended at 25-17.

The trend did not back off as the Cougars finished off the Pilots with a strong offensive attack. With multiple 3-0 runs and a 15-9 lead, the Cougars completed the third set 25-17.

Dirige had a match-high of 15 digs and two assists.

The Cougar’s perfect tournament finished with a win against the University of Idaho Vandals. The set scores of the match were: 27-25, 25-17, 25-18.

Bradley and Urias both tied with 11 kills during the match.

A quick 6-0 run from junior outside hitter Penny Tusa, and Lusby helped the Cougars take the lead early.

Idaho fought back, scoring multiple runs. The Cougars and Vandals had a number of ties throughout the first set.

In the second set, the Cougars again took the lead early 14-6 against the Vandals.

Idaho found momentum halfway through the set, but Jehlarova finished the set for WSU with a kill, 25-17.

The final set of the match was not as easy for the Cougars, but it still resulted in a win.

With a 13-7 early lead, the Cougars completed the final set against the Vandals 25-18.

Tusa also had a six service aces, a career-high.

After the match, Pukis and Urias were named to the all-tournament team.

WSU will host the Cougar Challenge this weekend, starting with a game at noon on Friday against Idaho State University at Bohler Gym.