Athlete of the Week: Averie Collins 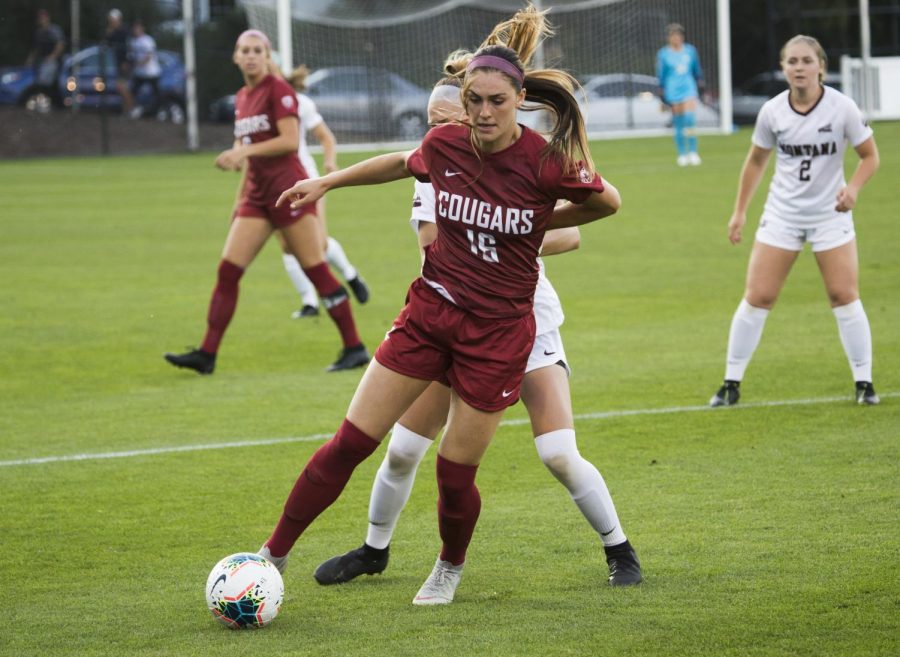 Graduate midfielder Averie Collins protects the ball from a Montana player during the game on Aug. 30 at the Lower Soccer Field.

Gonzaga University held the No. 17 WSU soccer team scoreless Thursday night until graduate student Averie Collins scored a goal after regulation to give the Cougars a 1-0 victory.

WSU is now 4-0 against their opponents this season, which can largely be attributed to star midfielder Collins, who transferred from Stanford University for her final collegiate season.

With four goals on the season and a clutch shot to end the game seconds after the ending of regulation, Collins has earned The Daily Evergreen’s Athlete of the Week Award.

In a post-game interview with WSU, Collins and the Cougars were not ready to back down after a frustrating night against Gonzaga, being held scoreless for the first time this season.

“When we came in and grouped up, we said ‘We end this when we want to end this,’” Collins said.

This was the first game that WSU won by less than three scores, beating their previous opponents by a combined score of 16-3.

“I think it’s a good challenge,” Collins said. “We knew Gonzaga was going to come out and test us.”

WSU’s schedule will strengthen when the team faces Pac-12 opponents such as No. 2 UCLA, No. 3 Stanford and No. 4 USC.

“I think it shows that we’re gonna fight. We’re gonna fight against the big teams,” Collins said. “This was only the first test of many. So we’re getting ready.”

In a post-game interview with WSU, head coach Todd Shulenberger said his team knew Gonzaga would be a tough matchup.

“This is a Pac-12 level game we felt like, on the road, hostile crowd and we are very proud of the group,” Shulenberger said.

Shulenberger held Collins in the spotlight when crediting his team for the win. He said before overtime Collins said, “We choose when to end this game.”

“Avery, what a goal she had tonight,” Shulenberger said.

WSU soccer returns home to face Michigan at 7 p.m. on Friday at the Lower Soccer Field. The game can also be viewed on the Pac-12 Networks.