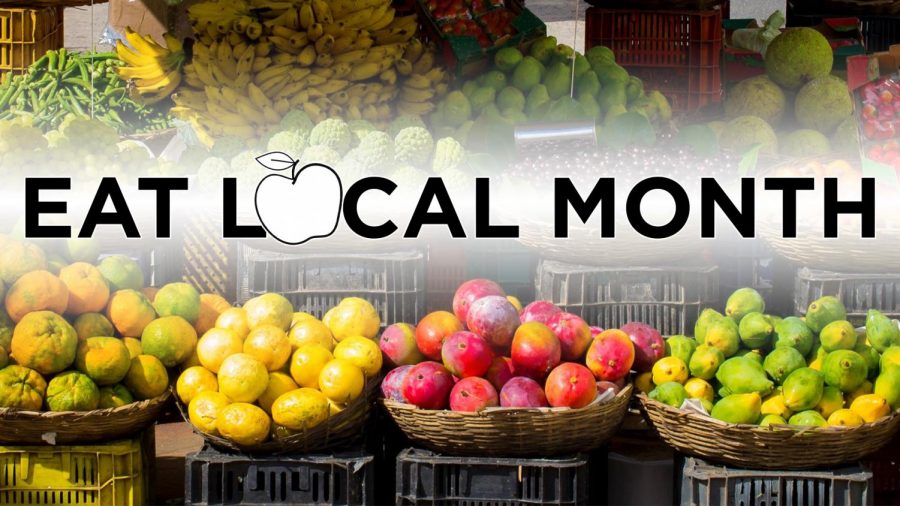 Eat Local Month, a collaborative nationwide program with hopes to involve more of the community in purchasing food from nearby farms, began this September, but buying local can be a year-round venture.

The next event, “Food Connections on the Palouse,” will be from 5:30-7 p.m. on Wednesday at Hunga Dunga Brewery in Moscow. It will include a guest speaker from Rural Roots to explain the importance of agriculture in cultivating a vibrant community in Moscow and Pullman.

Anne Zabala, the executive director at Backyard Harvest, said her nonprofit offers “gleaning” trips for volunteers. Gleaning is the process of picking fruit from a specific tree at a specific time. Zabala said if a local farmer has extra fruit on their tree, they will often donate it to these “you-pick” events.

Just this season, volunteers for the nonprofit picked about 13,000 pounds of fresh, locally sourced produce, said Paul Busch, volunteer and events coordinator at Backyard Harvest. Volunteers are even allowed to take home some of the produce they pick.

Picking fruit offers an added appreciation for the farmers that constantly grow and package food for their community, said Alice Ma, board member at both Backyard Harvest and the Moscow Food Co-op. When she went cherry-picking for the first time last year, Ma learned how fragile some fruit is, and it helped her feel closer to the farming community.

For busy students who may not have time to pick their own fruit, said Iris Mayes of the UI Extension horticulture program, the farmer’s market in both Moscow and Pullman have great opportunities for putting money back into the city economy — and Palouse farmers’ pockets.

“It’s [the Moscow Farmer’s Market] like a little festival every week,” Mayes said.

Recently, statistics from the 2019 Map the Meal plan showed that nearly 20 percent of Whitman County residents experience food insecurity. Nonprofits like Backyard Harvest pop open their trunks and work to bring the picked produce to people who experience this insecurity, Zabala said.

One reason for the insecurity rate is that many don’t have access to transportation, especially if they live in more rural parts of the county, Ma said. Programs like the Community Action Center’s “Palouse Tables Project: On The Move” are important to a community that supports its local farmers and lower-income consumers.

Backyard Harvest also offers benefits for those under the Supplemental Nutrition Assistance program, commonly known as food stamps. For every $5 spent, Zabala said $2 for produce goes back to the consumer.

Mayes, who has also worked as the UI Extension small farms educator for Latah County for the last five years, said Eat Local Month helps show people the value and wide availability of fresh produce. Both Winco in Moscow and Dissmore’s IGA in Pullman stock local produce, and students can also sign up for healthy cooking classes at both UI and with the Moscow Food Co-op.

Most local food pantries don’t have an income requirement, Mayes said, so students can go to one of the three at UI or those in Pullman to buy the donated food.

For those with little time, Ma said the best way to eat local is buying fruit in bulk, especially hearty fruits like pears and apples that don’t ripen quickly, and keeping them in the freezer.

She suggested going to “you-pick” orchards, like JM Farms in Harvard, Idaho or Bishop’s Orchard in Garfield, Idaho. Bishop’s Orchard also allows pickers to make their own ciders on Thursday and Friday nights and most of the day on weekends, according to its website.

During colder months, students can buy produce like winter squash or onions, Mayes said. The Tuesday Community Market at 1021 Harold St. in Moscow will have a limited variety of locally grown produce even after the Moscow Farmer’s Market ends this October.

“Even if something seems more expensive now, prioritizing dollars for healthy food is really important,” Mayes said. “People are learning that what they eat can have even short-term effects on their health.”

Some UI Extension programs, like those hosted by the UI Soil Stewards Student Farm, teach students who live off-campus how to grow their own salad greens and tomato plants, which Mayes said is simple to do even as a busy student.

By making small choices on where to buy food, one can make a big difference in their town, Busch said. Buying local helps a farmer that lives right down the street, rather than a massive corporation like Walmart or Albertson’s, Ma said.

Those interested in getting involved should go on VandalSync or CougSync to see what their fellow peers have planned, Mayes said. For WSU students, the best outlet for volunteer opportunities is the Center for Civic Engagement, and both UI and Cougs can seek out Backyard Harvest to sign up for plant-picking sessions.

“It’s pretty powerful when you take home food you [picked] yourself,” Bush said.

A full list and calendar of events can be found either on Buy Local Moscow’s Facebook page or on buylocalmoscow.com/eatlocal.