One attendee says she wants the university to stop being complacent 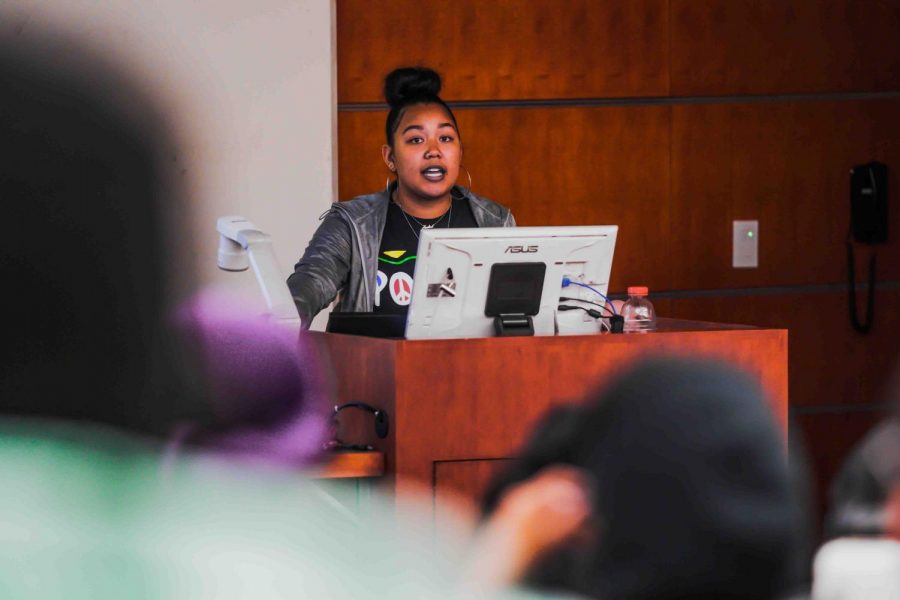 Makayia Thompson, president of Black Student Union, speaks to attendees at an open forum about WSU PD’s arrests of black individuals Tuesday evening in the Smith Center for Undergraduate Education.

The Black Student Union hosted an open discussion about the disparity of WSU police arrests toward black students.

Students and faculty met at 6 p.m. Tuesday at the Smith Center for Undergraduate Education for the Black Student Union Forum.

The discussion was a response to a Daily Evergreen article published on Aug. 26.

BSU president Makayia Thompson said she was not as surprised as she wanted to be when she saw the statistics from the article.

Many students spoke during the discussion. One of them was Orion Welch, the former president of Black Men Making a Difference.

“It’s hard to believe it’s not targeting — we’re still getting policed over anyone else,” Welch said.

Dawn Daniels, WSU police department administrative sergeant, attended the discussion. She said the department is waiting on a Civil Rights and Compliance investigation to see if there is an issue in arrests made.

“Don’t the statistics show there is an issue?” BSU vice president Sparkle Watts said. “What are they investigating?”

Thompson asked the group to consider how students can hold authorities accountable and why the disparity of arrest rates exists.

“It doesn’t make sense why our arrest numbers are so high,” Welch said. “How do we make up such a small percentage of the population but have the most arrests out of anyone?”

One of the discussion points revolved around a paraphrased statement in the article from Phil Weiler, vice president of university marketing and communications. Out of 194 arrests from May 2018 to May 2019, 24 were black people, Weiler said that numbers this small might not mean much in the article. 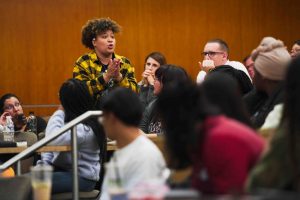 HSING-HAN CHEN | THE DAILY EVERGREENMariela Frias-Gomez, co-chair of the VIBES Conference, voices her opinion on WSU PD’s arrests of black individuals on Tuesday evening in the CUE.

Thompson said she wants to see more actions than words from the university and police.

“They’re only creating ‘solutions’ because we forced them to do something,” she said. “Stop being complacent — do better.”

Watts said it is important for students to not let the statistics define who they are, but also to be informed they exist.

“Don’t feel like you’ve chosen the wrong school, you’re meant to be here,” she said. “We’re talking about problems to make it better for students of color — not to cower from them.”