Pullman residents, WSU students come together to help care for birds in need 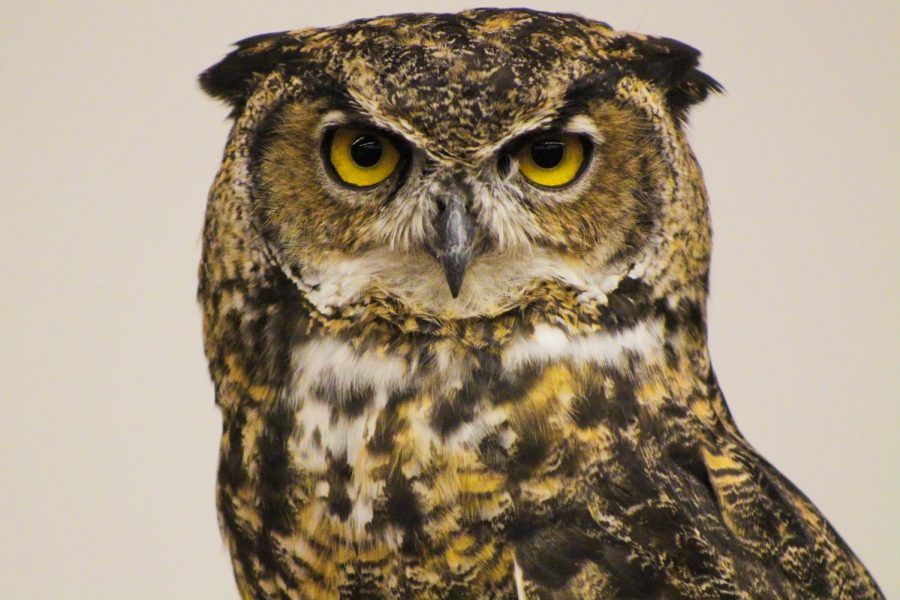 Sprite the Great Horned Owl is one of 12 birds the Raptor club takes care of at Wegner hall Monday.

The Raptor Club has presented its birds of prey all over campus, most recently at the football game on Sept. 7, and it has sent them soaring into public view via social media.

“The fact that you can go out and learn how to present with these birds that you sometimes go your entire life without see­ing up close and in person, I thought was something that was absolutely amazing,” Katherine Wishon, the club’s public rela­tions officer, said.

Some people join because they love birds, and animals in general, and want to learn more about them. Others join in order to get their foot in the door when looking into a career in wildlife. The club gives hands-on experience with caring for and presenting the raptors, Wishon said.

“It was probably one of the most striking and inter­esting opportuni­ties that there is on campus,” Wishon said.

The club makes itself accessible to anyone and every­one if they’re over the age of 18. People from all over the Palouse area can join the club, even if they aren’t a WSU stu­dent.

They have a wide range of students majoring in everything from chemical engineering to zoology. A good portion of these members end up going into wildlife careers or continue to support the club as a hobby, Tarlyn said.

The WSU Raptor Club was founded in 1981 by Dr. Erik Stauber, a former vet at WSU, President Hannah Tarlyn said. When a red-tailed hawk named Charlie was found severe­ly injured, Stauber started the club. Dr. Stauber was then left with the choice of putting the animal down or turning it into an educational animal.

The club acquires its birds through the Exotics and Wildlife Sevices. These birds are often physically or mentally disabled to the point that they cannot be released back into the wild without serious conse­quences.

These birds are then displayed as edu­cational birds, letting the public learn more about the raptors themselves and the programs that go along with them, according to the club’s website.

The WSU Raptor Club has 12 birds ranging from the smallest pygmy owl to a golden eagle.

The Raptor Club has an office in Bustad Hall, Room 110. People can also email the club for more information on how to get involved at [email protected]