Cougars take on Cougars in Houston 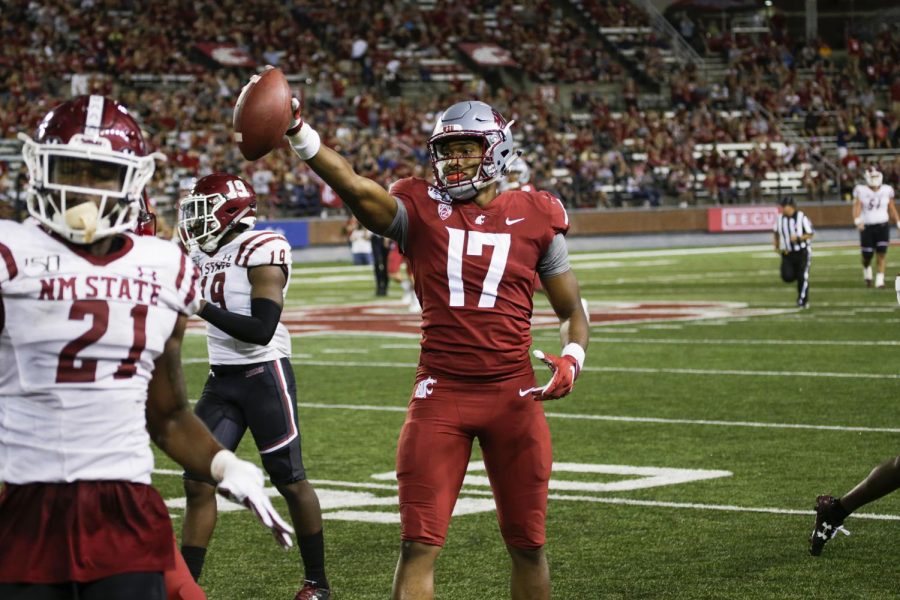 Redshirt freshman wide receiver Kassidy Woods celebrates a 26-yard catch for a first down in the third quarter on Aug. 31 in Martin Stadium.

Football team seeks to
keep strong offense,
improve defenseNo. 20 WSU football will have its first road game against the University of Houston at 6:15 p.m. on Friday at the Houston Texans’ NRG Stadium.

The Cougars (2-0) travel to Houston after a blowout 59-17 victory against the University of Northern Colorado on Saturday.

Houston (1-1) has a win against Prairie View A&M University under its belt, along with a closely contested loss against No. 5 University of Oklahoma, 31-49.

Redshirt senior quarterback Anthony Gordon showed off his arm again against UNC as he threw for 464 yards and four touchdowns.

Postgame, Gordon was critical of his performance against UNC in comparison to his week one debut.

“I thought last week was a little bit cleaner,” Gordon said, “of course, I didn’t turn the ball over, but there is some positive to pull from it — I didn’t get sacked this week.”

Gordon held his receiving core in high regard as he completed passes to seven different targets against UNC.

“It’s pretty easy to play when I have receivers like that on the outside,” Gordon said. “Put the ball in their hands and good things will happen. I got a lot of mouths to feed and a lot of people to keep happy.”

Through the first two games, the offensive line has kept Gordon protected, only allowing one sack so far.

“I got to give love to the offensive line,” Gordon said. “Coach [Mason] Miller and all those linemen do a great job of course at keeping me healthy.”

After the game against UNC, head coach Mike Leach said that his defense struggled a bit against the UNC offense.

“Well, their offense was kind of in a rhythm,” Leach said, “so we wanted to break that. The other thing was that it seemed that we were overrunning some things and wanted to get refocused.”

UNC’s offense averaged four yards a carry against the Cougar defense, rushing for 216 yards during the game.

Redshirt junior linebacker Jahad Woods compared this year’s defense to last year’s squad after the game, which finished first place in the Pac-12 in sacks and second place in takeaways.

“It is definitely different,” Woods said, “we are still about the same things, taking the ball away and putting pressure on the quarterback.”

Woods praised the Cougar offense, which he practices against during the week.

“They make us better tremendously,” Woods said. “Going against one of the top receiving core[s] in all of America, and having Gordo going against you in seven-on-seven, it makes us better.”

Houston will be WSU’s toughest opponent yet, as the team has not traveled on the road yet this season and will be playing in the massive NRG Stadium, which a capacity of over 72,000.

Against UO, Houston put up 408 total yards, with over 241 yards rushing. This may be a problem for WSU’s defense as they could not seem to stop UNC’s run game last week, giving up 11 first downs on the ground.

For Cougar fans that are attending the game in Houston, they can continue to root on for the Cougars as last year’s quarterback, Gardner Minshew, will be starting for the Jacksonville Jaguars as they visit the Houston Texans and play in NRG Stadium as well.

Jacksonville kicks off against Houston at 10 a.m. PST. Kickoff for WSU is at 6:15 p.m. and can be caught on ESPN on Friday night.