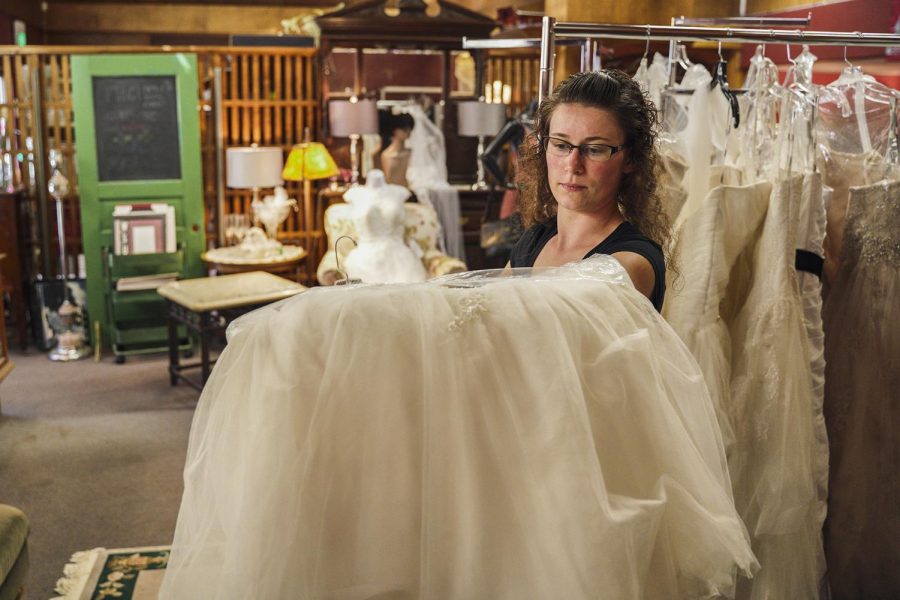 Viktoria Veliz, part-time employee of Lily Bee’s Consignment Shop, shows a wedding dress that was left to dry in the shop Thursday afternoon following the flood that swept down Main Steet Wednesday.

Stores in downtown Pullman are cleaning up and returning to business as usual following the flooding that occurred Tuesday.

Water levels at the intersection of Main Street and Southeast Pine Street were nearly knee-high during the peak of the flooding Tuesday afternoon.

Mercedes Enciso, assistant manager at Thomas Hammer Coffee Roasters, said the business was forced to remove and clean carpeting near the front doors of the shop after floodwaters leaked through the doors.

Enciso said some or all the carpets may need to be replaced entirely, but despite the disturbance the business was up and running by the next day.

Viktoria Veliz, part-time employee at Lily Bee’s Consignment Shop, said floodwater seeped 45 feet inside the store from the front doors of the shop.

She said most of the clothing and merchandise in the store was not damaged, but some wedding dresses and wood furniture suffered minor damage.

“I think we were lucky; we were able to move stuff as the water came in,” Veliz said.

She said parts of the store’s carpeting were damaged from the floodwater and they may have to replace the carpet entirely. They did not find any damage to electrical utilities.

Lily Bee’s Consignment Shop had to close Wednesday to allow for a straightening-up of the store.

“A lot is cleaned up, but there is still a lot of cleaning to do later,” Veliz said.

On Thursday, a cleanup crew worked inside of Washington Federal Bank to tear up the water-stained carpets and replace the damaged drywall.

Employee at Washington Federal Bank, Mary Jo, said an inch of water pooled inside the business, but the bank never closed despite the flooding.

Jo said Evolve On Main helped by bringing sandbags for the front of the bank and sweeping water out of the entrance.

“Evolve was amazing to help us,” Jo said.

Customers have been hesitant to come into the bank following the flood event, she said.

A sign on the front door of the bank encourages customers to come in despite the cleanup efforts.

“We are just drying out,” it reads.